La Liga looks to be an exciting option early on this year in FUT 21, check out all the cheap beasts to add to your team!

With the Top 1000 Player Ratings having been released for FIFA 21 Ultimate Team, FUT fans have been taking to social media to share their exciting new starter squad ideas.

As is the case every year, expect a number of cheap players to fit the meta early on, and be considered cheap beasts!

Here are some top players from La Liga that you can look into early on in FUT 21!

While GKs are a pretty standard position to fill in FUT, with only a handful of attributes, there are still only a number of players that will truly  fit the bill for an unreal early shot stopper!

With plenty of options available in La Liga, it’s really a case of selecting a keeper that best fits your team's chemistry needs. If in need of a Brazilian 82 Neto looks to be a fine selection, with 82 Rulli fulfilling the need for an Argentine.

If looking for a link to Diego Carlos’ very popular, but expensive starter card 82 Vaclik fits the bill, and for a more generic Spanish option, go for 83 Aitor.

In any team, the defence is key, and in FUT, that’s no different, with capable CBs being a difference maker in games. 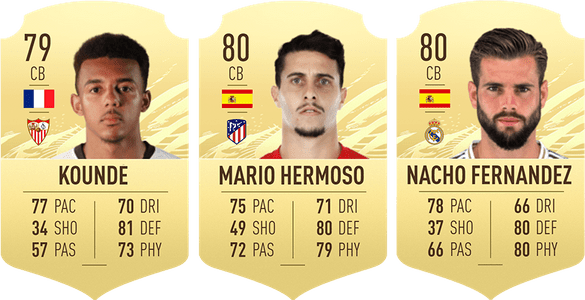 The CBs in La Liga this year are somewhat hard to come by for those early starter squads with only 79 Kounde, 80 Hermoso and 80 Nacho Fernandez offering cheap, but well-rounded routes into the La Liga backline.

Full-Backs are a majorly important position in modern football, and FUT shouldn’t be much different, with full-backs needing to be quick, defensively adept as well as useful on the attack.

Luckily, full back options are far more plentiful in La Liga this year. Despite the lack of top tier RBs, 78 Emerson and especially 81 Capa look to be the best options available at the start of FUT 2.

In LB, you’re spoilt for choice, with 2 83s, Gaya and Yuri Berchiche posing as perfect starter options in the Spanish League. For a more South American flavour, 81 Renan Lodi is also predicted to be cheap.

Your CMs and CDMs in FUT are the true workhorses of the team, so making sure you have strong players with stamina early on is key.

The centre of midfield in La Liga certainly doesn’t lack quality early on. For typical CDM options, the higher-rated 84 Partey and 83 Fernando cards look to be very capable defensive options, both featuring 82+ in both defending and physical.

For more box-to-box style CMs, look no further than 79 Kondogbia, 81 Herrera and especially 82 Llorente, with the latter proving to be one of the most popular players for starter teams this year judging by social media.

The CAM role in FUT is predominantly a playmaking one, however, having agile players that can contribute with goals are great assets to an early squad.

This year, CAM options in La Liga are limited to higher-rated cards, with the already OTW confirmed for 83 Odegaard, and very technical 83 rated cards for 83 Coutinho and 83 Fekir also on offer for playmaking duties.

82 Canales will be the cheapest out of the 3 and looks to be perfect for the role, featuring 80+ in shooting, passing and dribbling.

Attacking options are where La Liga really begins to shine on the lower end, thanks to 79 Rodrygo, 82 Correa and 82 Ocampos specifically. All 3 offer something a little different, from the pace of the Brazilian to the more agile Atletico man, to the strength and presence of the Europa League winner.

On the flip side of the attack, we have plenty of pacier, technical options. Pace is no problem for 78 Machis, 80 Vinicius, 81 Guedes and 82 Carrasco, all providing perfect left-sided attacking selections, with the Belgian strong linking to 82 Llorente in the midfield.

If looking for a slightly more technical, playmaking winger, 84 Oyarzabal could be an interesting shout.

Goals win games in football, it’s as simple as that, so having natural goalscorers leading the line in your team will be vital.

Finally, we have La Liga striker options, which look very well rounded to suit most playstyles. For those looking for pure pace 79 Morales and 81 Inaki Williams definitely look to be the plays, offering 86 and 94 pace respectively.