The Godfather returns to Lost Heaven.

Tommy Angelo, a taxi driver working in the city, helps two members of the Salieri crime family escape from a rival gang, which throws into motion the kind of "rise and fall" narrative any mob-movie film buff will recognise. What's perhaps most impressive, however, are the performances behind the story. Paulie and Sam, Tommy's closest peers, are hot-headed and smooth-talking respectively. Don Salieri is cool, calm, while even Vincenzo, the family's armourer and gunsmith, is bought to life by exceptional characterisation.

As Tommy rises through the ranks of the family, becoming embroiled in battles for Lost Heaven's underworld, lead actor Andrew Bongiorno becomes more likeable and relatable with every scene. In a year of great video game stories, there's no denying that Mafia's remake is one of the most enjoyable - if a little derivative from the cinematic references it wears so clearly on its sleeve. 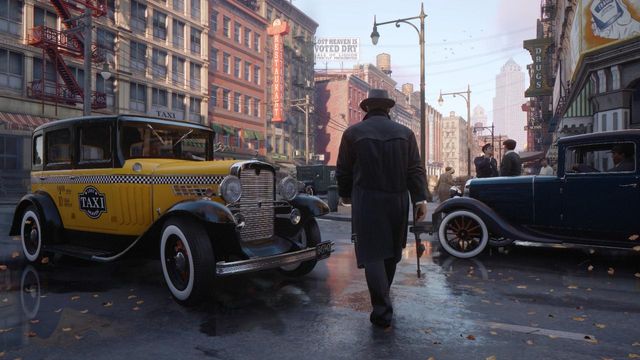 Taking Out The Trash

Tommy's story may begin with him being behind the wheel, but it isn't long before he's helping collect protection money, committing property damage, or getting into all-out gunfights with rival gangs.

Unlike missions in other open-world titles, which can feel like all out chaos from the get-go, Mafia: Definitive Edition builds into a crescendo by siloing its missions. Each of its missions feels like a reward in itself, offering equal parts action and story in each sequence.

In fact, each of the game's chapters feels like an episode that builds into multiple arcs. While that means things can be much more linear than something like Grand Theft Auto 5, it's all glued together in a way that frames every encounter, even the aforementioned collection of protection money, as an action-packed set piece.

A lot of that comes down to the way the game controls, with this revamped Mafia built in the same engine as its most recent mainline entry, Mafia 3. That means that weapons have a satisfying heft, environments can be surprisingly fragile, and driving is... well, we'll come to that.

Firearms and throwables are the main way you'll go about your work, from snub-nosed pistols to shotguns that can send enemies flying backwards in a shower of debris from nearby items caught up in your reticule. There's no health regeneration, though, so aside from first-aid kits you'll be on the lookout for (which feel strangely nostalgic in today's gaming landscape), you'll also be looking to use cover where possible.

One early mission sees Tommy and Paulie roughing up a rival gang member before he flees and backup arrives. From there, the duo need to navigate a firefight built with verticality and environmental hazards in mind. There's nothing groundbreaking about the mission design, but it all flows so well and controls so responsively that it ends up as more than the sum of its parts.

Melee combat is satisfying thanks to flashy finishing moves and solid sound effects, but in truth, there's not a lot to it. You can punch and counter, but by the time you grab a melee weapon, you'll rarely need to do anything more than swing for the fences.

Asleep At The Wheel

If there's one thing that rains on the parade that is Mafia's gameplay, it's its driving. While it is leaps and bounds better than anything veterans of Lost Heaven will have dealt with back in 2002, the cars of the 1930s and 1940s just don't feel exciting to drive for the most part.

While that undoubtedly comes with the limitations of automotive technology, many of the game's car chases feel successful due to luck than judgement. Some roadside objects can be driven through or other, while some are seemingly impervious to damage, while some driving set pieces devolve into driving from one small scripted sequence to another.

And, in case you were wondering, the track-based race that was derided by many in the original game is better, but it still feels at odds with the rest of the game in terms of how loosely it can control.

Loosely based on 1930s and 1940s Chicago, the city of Lost Heaven has been revamped in stunning detail. It's nowhere near the sprawling mass that is something like Los Santos, but what it does offer is an authentic, faithful depiction of America post-World War 1. The puddles on the street reflect light, cars show impressively diverse damage signs, and districts have been redesigned from the original to make them more unique.

With such a stunning open world, hopping into free roam just to cruise around various neighbourhoods would be ideal, but there's simply not a great deal to do. Side missions are varied but few and far between, essentially the opposite of Mafia 3's constant checklists.

A sumptuous reimagining of an eighteen-year-old title, Mafia's definitive edition is exactly that. Tommy Angelo's story, and the smaller ones that occur around him, feel just as exciting to watch play out as they did back in 2002.

Mafia: Definitive Edition has its quirks, sure, but if you're looking for a 25 - 30-hour story with solid gameplay, a great cast of characters, and a gorgeous city to visit, there's no better place to be than Lost Heaven.

Review Code Was Provided By The Publisher