Details of Fall Guys coming to the Switch along with news of Breath of The Wild 2 all came to light.

As well, a DLC pack for Super Mario 3D All-Stars was leaked, and fans should be thrilled!

tlspmoon posted on Twitter an image of what appears to be the lineup for the next Nintendo Direct.

GTA 3 will be coming to the Switch along with a new Kirby Fighters game it seems.

However, there was a subtle point on a DLC pack coming to the recently released Mario 3D All-Stars title. 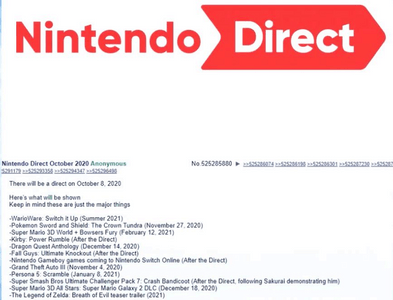 The leak itself notes that the second iteration of the beloved Mario Galaxy franchise will be releasing on December 18th. 2020 as a purchsable DLC pack.

The critically acclaimed series is noted as some of Nintendo's best work with the Mario franchise.

It is unknown how much this DLC pack will cost.

We can speculate it will not be full price like the collection itself.

If you have not experienced one of the best Mario games of all time, check out some gameplay footage from years before!