Chemistry is one of the most important aspects in FUT 21, check out how it works!

Chemistry is one of the main factors when assembling a team in FIFA Ultimate Team, being the links between all the players on the pitch, to determine how well they’ll play together in-game.

What Is FUT Chemistry?

Chemistry in FUT may be the most important part of building a squad of players, outside of the actual players themselves.

Chemistry represents how well a player will perform on the pitch, and shows the links between teammates. High chemistry values on players and the team overall are crucial in realising your teams’ full potential, with lower chemistry values dramatically reducing player ability in game.

Here are some basic chemistry concepts to get you started!

There are two types of chemistry in FUT, Player Chemistry and Team Chemistry

Player Chemistry indicates the chemistry value of any one player, and ranges between 0 and 10, with 10 being the maximum chemistry attainable per player.

Team Chemistry reflects the overall sum of chemistry in the team, ranging between 0 and 100, with 100 being the maximum chemistry attainable for your overall squad.

There are 2 main factors that affect a players’ chemistry in FUT 21:

These 2 factors combined will determine the overall player chemistry out of 10.

A players’ chemistry is impacted by how closely his position on the pitch in your squad matches the positioning set on his card item in FUT.

Currently, in FUT, there are 4 possible situations:

If you wish to play a player in a position that doesn’t currently match his position on his card, it’s possible to change his positioning via a position change consumable, however this is somewhat restricted. For example, a RM can only be changed to a RW and RF, meaning he won’t ever be fully suited to a role on the left hand side.

Ideally, you’ll want your players playing in their natural position on the pitch as much as possible, however it’s possible to play them slightly out of position, i.e. a LB at LWB, CDM at CM etc.

To find out what positions on the pitch a player is suited to, you can use the table below:

Moving on, teammate links are another major part to generating chemistry between players in FUT 21.

In short, if players share the same nation, league or club, the higher the chemistry they’ll have between one another. 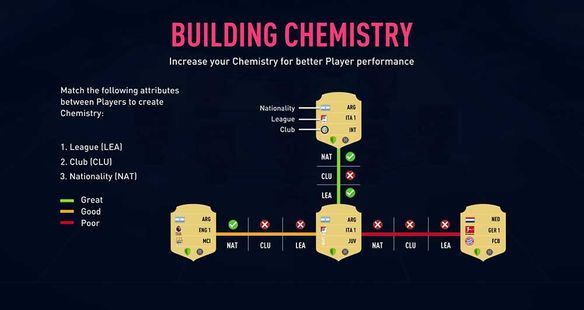 As you can see from the image above, chemistry links between players fall into three categories:

As you can also see from above, the strength of links is also colour co-ordinated, with Great, Good and Poor links. If you match all 3 areas, you’ll also obtain a Perfect link, which is the best link possible.

To get a better understanding as to how player links work, and the chemistry generated, you can refer to the table below!

There are two ways in which bonus chemistry points can be attributed to players in FUT 21:

It’s worth mentioning, that each bonus chemistry type can each add a maximum of +1 chemistry to a player, meaning if they have loyalty and manager bonuses, they can gain an additional +2 chemistry.

Very simply, manager chemistry applies a +1 boost to a players’ chemistry if they share either a:

It’s worth noting that, even if a player shares both the same nationality and league as a manager, they’ll only receive a +1 chemistry boost, so it’s important to utilise your manager to boost as many players in your team as possible.

If you wish, you can customise managers by applying manager league consumables, allowing you to tailor various managers to various teams, depending on the nations and leagues in your squad.

Loyalty chemistry again gives a +1 chemistry boost to players that:

Loyalty can become a major part of completing certain difficult, high chemistry SBCs such as League SBCs, so having an understanding of loyalty is key!