Master the Type 63 with this handy guide.

Perhaps one of the most underused weapons in Black Ops Cold War, the Type 63 tactical rifle can easily be one of the strongest weapons in the game.

The semi-automatic rifle comes with high damage output and solid levels of accuracy, making it a perfect weapon of choice when engaging with targets at long distance.

Designed in the late fifties and early sixties, the Chinese rifle shares a resemblance with the SKS. With an effective firing range of up to 500 metres, it was heavily used in the Vietnam War by the Viet Cong.

The Gunsmith features a range of attachments to further increase what the Type 63 is capable of. But what exactly is the best loadout for it?

Rather than running head-first into the action, the Type 63 is best used overlooking areas where all the action takes place.

The ability to quickly fire off several shots in quick succession thanks to its semi-automatic nature enables the Type 63 to be extremely effective in mid-to-long range gunfights.

If you can get yourself into a good position on the map, the possibility of dealing a huge amount of damage is very high.

Regardless of distance, this attachment combination deals a devastating amount of damage whether it’s in a close-quarters contest or a long-distance duel from one side of the map to the other.

The party piece is the steady aim laser. The additional hipfire accuracy gained can often make the difference between losing out on your next scorestreak or going aboard the Chopper Gunner to rain fire down on the enemy. 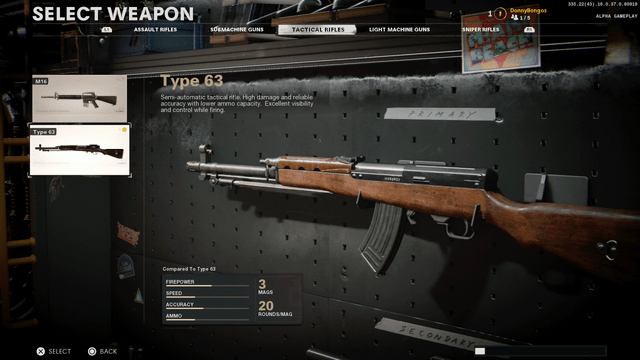 Type 63: The most underrated weapon in Black Ops Cold War?

I chose to stick with semi-auto weapons for this class, so I went with the 1911 pistol as my secondary. With a strong trigger finger, it’s the perfect crutch to fall back on, if the Type 63 runs out of ammo.

With aggression being the name of the game, the frag grenade is the lethal equipment of choice. Launch a hail Mary into a congested area of the map for maximum impact.

Ideal for slowing down enemies moving in on your position, a well-timed stun grenade can set up a few easy kills.

This will further increase your awareness of your surroundings by placing a Field Mic ahead of your location to listen out for any incoming footsteps heading your way.

This selection is somewhat simpler than other loadouts but it still does the job. Flak Jacket increases your resistance to explosives, Tracker enables you to see any enemy footsteps that are nearby, and Ninja gives you the ability to sprint quietly around the map.

The Gunfighter Wildcard is the perfect addition to maximise what the Type 63 is capable of on the battlefield. With eight attachments equipped, it’s very difficult to go wrong with this underrated tactical rifle.