The Alpha for Black Ops Cold War is finally here.

PS4 players have been checking out the new Call of Duty all weekend long.

This comes before the beta, which has been all but confirmed to be cross-play.

Tony Flame who is one of the game designers for Black Ops Cold War, along with a community voice as of late has noted some important details.

Apparently, the Sniper Rifles in the Alpha are buffed right now.

Along with mentioning the strength of Sniper Rifles in this tweet, he also alluded to cross-play.

"Crossplay is coming, but we knew it wouldn't be in Alpha"

So, it appears cross-play will be coming later down the line; more specifically in the open beta next month. 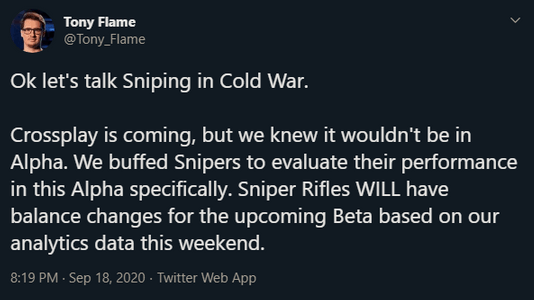 The official dates for the beta were released a while back.

Pending no changes, this is when the crossplay beta will begin on PS4, Xbox, and PC:

So, with the cross-play beta coming soon we wait and see what changes they make between now and then.

We can assume that Sniper Rifles are getting a significant nerf as noted by Tony.