Struggling to master the MP5 on Black Ops Cold War? We have got you covered!

The MP5 is a weapon synonymous with the Call of Duty franchise and after being one of the strongest weapons from Modern Warfare, it returns to Black Ops Cold War.

After playing with the SMG for many years, this iteration of the weapon is one of the more accurate SMGs on offer, but does fall short in other areas.

In 1974, the MP5SD was introduced, which is a suppressed variant of the MP5, which was used in the Vietnam War in 1975 by the Green Berets.

Known for its ease of control when firing and outstanding agility, the MP5 is still a solid choice despite its shortcomings.

With so many attachment combinations to choose from, what is the very best loadout for this solid SMG?

For those looking for a weapon with a bit more control than the AK74u, the MP5 is certainly a viable alternative.

The MP5 definitely has the edge over the AK74u at range, enabling you to easily secure kills at longer distances.

Thanks to that additional range, a range of attachment combinations can be selected to suit all styles of play.

By selecting this combination of attachments on the MP5, its flaws are completely diminished.

All of the selected attachments drastically increase overall firepower, making it extremely effective at longer distances.

The 40 Round Speed Maggives you additional bullets in the clip while maintaining an increase in reload speed. 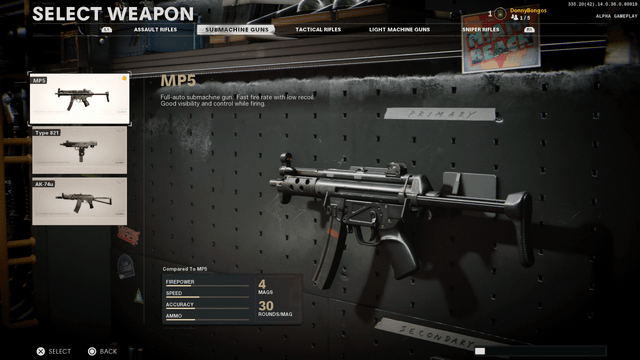 MP5: A staple of Call of Duty history returns

Rather than selecting a shotgun or a pistol, it’s important to be the team player which is why I have chosen the Cigma 2 launcher as my secondary weapon of choice.

It may not be as fun as running around a building with a shotgun, but it plays a pivotal role in keeping your team in the battle rather than looking at a killcam.

Use it to take down Spy Planes and more importantly, Attack Helicopters. Choppers on Black Ops Cold War are some of the strongest Scorestreaks to select, and with some of the maps containing very little cover, shoot it out the sky as quickly as possible!

Like any other Call of Duty, C4 always packs a punch and on Black Ops Cold War, it’s no different!

Use it to blow up vehicles with ease or throw it into the middle of your smoke grenade for a nasty surprise for anyone who dares to walk through the mist!

The Jammer is the perfect field upgrade to go alongside the MP5. It can be used in a variety of ways to halt the momentum of the opposition and swing the game in your favour.

Place it in a Domination point to disrupt all enemy activity in the vicinity, giving you and your team the perfect opportunity to perform a well-executed offence to secure control.

With the MP5 already kitted out with all the attachments imaginable, this choice of six perks will further increase your advantage.

Last but not least is Ghost and Ninja. This perk combination will keep you hidden from Spy Planes when traversing the map alongside reducing footstep audio when sprinting, enabling you to navigate the map quickly and without alerting enemies to your locaton

By selecting this Wildcard, you have the option to choose a total of six Perks. The MP5 already packs a punch with just five attachments so it's more beneficial to select more Perks over attachments.