The ultimate guide to the M16 in Black Ops Cold War!

The M16 has a strong legacy in the Call of Duty franchise and it makes a triumphant return as a tactical rifle in Black Ops Cold War.

If you experienced its pinpoints accuracy in Black Ops 1, you'll be pleasantly surprised at how much better it has gotten in the space of 20 years.

In 1983, the US Marine Corps adopted the M16A2 rifle with the US Army adopting it three years later. It fires an improved 5.56×45mm NATO cartridge and features a newer adjustable rear sight, case deflector, heavy barrel, improved handguard, pistol grip and buttstock; as well as a semi-auto and three-round burst fire selector.

With so many options on your weapon and lots of extras to attach, what is the best loadout for the M16?

The M16 is an extremely potent semi-automatic rifle and true to its nature in Call of Duty, it absolutely beams.

For a burst-fire rifle, its fire rate is fantastic with impeccable accuracy and strong damage.

If you fancy yourself as an accurate player, this weapon will be your best friend on large open maps like Satellite.

It's a weapon that will do fine even without the proper attachments due to its easy control and great damage.

Due to its vulnerability at close quarters, you'll want to play a more passive style using lines of sight to exploit its incredible range and high accuracy.

The M16 is a passive player's bread and butter, a highly accurate and potent weapon capable of going toe to toe with long-range weapons. But, where it excels at ranged engagements, it suffers at closer ranges.

In fairness, the gun is that good it can do very well at medium and some short distances. But if you do miss a burst, it's going to be difficult to win that gunfight, especially with so many good weapons out there.

As previously stated, this gun will fly with limited attachments and most setups, but it's one of those weapons that with some fine-tuning with really soar.

The Millstop Reflex just adds that extra bit of accuracy for me that you can't get with the iron sights and when you're facing off against a sniper, the extra accuracy makes the difference.

The Muzzle Brake will help control any kick that you might experience, for someone that isn't too familiar with the weapon, it might not make a big difference (especially if you're aggressive and taking your engagements at medium range. But to really make the most of that range and accuracy, it will really help at taking players head glitching the sand dunes on Satellite.

Couple the Muzzle Brake with the Front Grip and the weapon will literally not budge an inch.

With the nature of burst-fire weapons, you need to land every bullet because it makes the difference. The last thing you want is to miss your shots and to wait for the next burst to fire. We recommend tacking on the 16" Strike Team and Quickdraw Handle.

Some alternative attahcments you can try out are one of the scopes to increase your magnification at distance, which will work perfectly with its low recoil but limit your ability to take fights at closer ranges.

You can give the Tactical Stock a go, which increases your movement speed while aiming down sight up to 65%, meaning you rarely need to turn a corner or move without letting go of the left trigger. 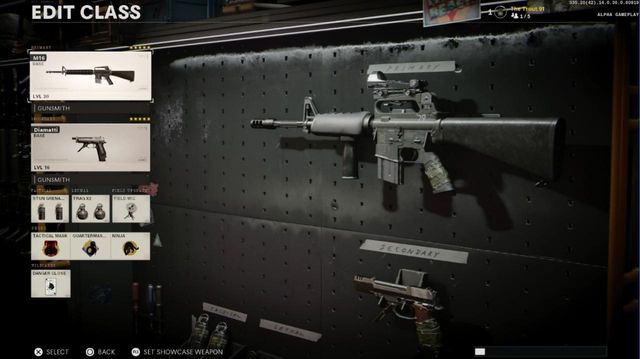 M16: Continues to be a laser beam in Call of Duty games

With a burst fire weapon like the M16, you're vulnerable up close. Your secondary I feel is always a preference and map choice, but the Diamatti is my choice.

With a setup like this, you can easily spam hipfire it at close quarters to give you a fighting chance that gets close to you and gives you the chance to defend yourself on more than one occasion, where a shotgun may let you down.

I think both the Stun and Smoke play vital roles. The stun will slow down enemy pushes while the smoke gives you the chance to make a sneaky getaway and reposition.

I like running Danger Close, so I'll opt for the Stun grenade more often than not.

I think the frag grenade is the clear winner in this one, the C4 becomes redundant with the rest of the setup.

The Field Mic is a great partner for the M16 because you can set it up defensively to watch your flanks.

Putting it up against walls will allow you to see what's coming while placing it behind you will give you intel if someone flanks.

Perks are enhancements to your physical ability and this class is essentially designed so you don't need to worry about moving as much as other classes because it simply doesn't need you to do so.

A rare appearance for the Quartermaster, but having an excess of Field Mics to watch your back (providing they aren't running Ninja).

Finally, I would opt for Ghost to keep you off enemy Spy planes as you don't want to be found out (just be sure to move about where possible or the perk becomes redundant).

I really like running Danger Close on this class, because having two stuns and two frag grenades is of great benefit when players attempt to rush; due to how dramatically it can slow them down.

The obvious choice would be Law Breaker, which gives you the chance to take an extra Primary weapon like an SMG. On a map like Moscow, it's not a bad idea, but if you use this class the way it's intended to you won't need it.