Prepare to face some big beasts in the search for new gear.

This will be a brand new iteration on the Nintendo Switch, though we'll keep you updated if it comes out on other platforms like PC and PS5!

Here's all we know right now about Monster Hunter Rise.

The game's demo will introduce players to multiple weapon types, a handful of monsters, and new mechanics including Wyvern riding.

It'll be available until February 1st.

Monster Hunter Rise is a third-person open-world RPG; with a massive emphasis on gear collection and adventure.

In these titles, you will go up against some massive monsters and earn better gear with which to take on more monsters.

We also know the Capcom composer Satoshi Hori, who worked on Resident Evil 7's soundtrack, will be composing the game's score.

Players will be able to ride Palamutes into battle, aiding in traversal.

There will also be more verticality to areas, as well as the ability to ride enemies – doing damage by sending them crashing into walls.

Monster Hunter Rise will be releasing on March 26th, 2020. Only a few months to go!

Check out the full trailer debuted at the Nintendo Direct Mini Partner Showcase!

There's also this nifty 30-second teaser to whet your appetite:

The game's demo will introduce players to multiple weapon types, a handful of monsters, and new mechanics.

It'll be available until February 1st.

At the end of the trailer, they also revealed some of the editions for Monster Hunter Rise.

The deluxe edition will include the following items: 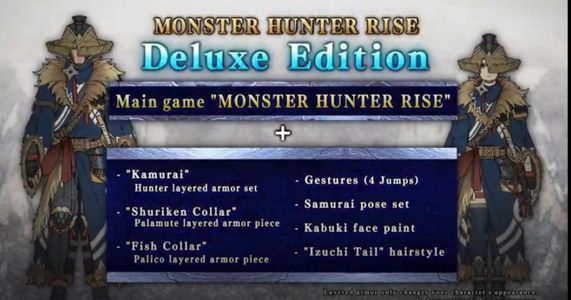 Along with the editions of the new Monster Hunter title; there are also some neat pre-order bonuses coming! 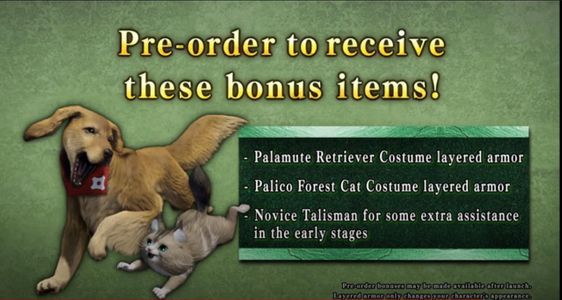 A big Capcom leak revealed that while the game would be exclusive to Switch at launch, it'll eventually come to PC in October.

In fact, the leak suggested that Nintendo paid around a cool $6 million dollars to make the game exclusive to Switch at launch.

Expect multiple weapon classes, and it looks as though Capcom is releasing trailers for each.

Check out the ones we know of so far:

Stoic, poised and precise. The Lance is a weapon with excellent defensive and evasive capabilities. Guard or step-dodge enemy attacks to stay in the offensive as much as possible.

“Twin Vine” is a silkbind attack that tethers you to your target allowing you to swiftly close the gap while guarding!

“Serene Pose” is a silkbind attack that channels an incoming strike into a swift counterattack.

Swift, elegant, and precise. The Bow combines high mobility and rapid attacks to rain down a constant stream of arrows onto monsters.

“Herculean Draw” is a silkbind attack that surges you forward in a designated direction and uses Ironsilk to empower your attacks.

Lithe, agile, and relentless. The Dual Blades deliver an onslaught of slices in rapid succession.

“Piercing Bind” is a silkbind attack that pierces targets with a detonating kunai. Landing further hits where the kunai is lodged racks up extra damage that scales with each hit.

Outstanding, overpowering ordnance. The Heavy Bowgun channels its weight into firepower, being able to load Wyvernheart or Wyvernsnipe ammo to cover any range or situation.

“Free Silkbind Glide” is a silkbind attack that allows for fast repositioning with multiple follow-up options.

Versatile combat at any range. The Light Bowgun excels at various roles, from rapid-fire barraging to inflicting status ailments, and supporting the hunting party.

“Fanning Vault” is a silkbind attack that vaults you into the air to rain down shots from above, reload, or even fire a Wyvernblast directly below.

Savage, smashing strength. The Hammer is a blunt force weapon that hits hard without giving up mobility. Smack enemies on the head to knock ’em down.

“Spinning Bludgeon” is a silkbind attack that unleashes a spinning attack that deals multiple hits while leaping forward. This attack can even be charged up!

Nimble, adept, and incredibly versatile. The Sword & Shield is a jack-of-all-trades capable of quick strikes and prompt evades. The shield serves a dual purpose of guarding and delivering bludgeoning damage. #MHRise

“Windmill” is a silkbind attack that uses Ironsilk to swing the sword around for continuous damage, while also protecting the hunter during the initial swing.

Unflinching, explosive artillery. The Gunlance brings together an impenetrable defense with high-power ballistics. Stagger your prey with a bevy of bombardments and dish out massive damage with its signature Wyvern’s Fire attack.

“Guard Edge” is a silkbind attack that takes incoming attacks and restores your weapon’s sharpness, making it ready for retaliation.

Ace of airborne combat. The Insect Glaive excels at aerial hunting tactics with the combination of a nimble staff and a Kinsect that absorbs essences from monsters, converting them to buffs.

“Recall Kinsect” is a silkbind attack that calls back your Kinsect while dodging. As it returns, it will perform spinning attacks that scatter restorative extracts, healing the hunter and recovering all of its stamina.

“Power Sheathe” is a silkbind attack comprised of a quick Wirebug-assisted dash and a sheathing motion that boosts your attack for a short time.

“Invincible Gambit” is a silkbind attack that fortifies the hunter, making them immune to flinching or being knocked back by even the fiercest of attacks.

Dynamic, crushing potential. The Charge Blade weaves together an empowered sword and stout shield to make up a mighty axe. Charge it up in sword mode, then unleash devastating attacks in axe mode.

“Counter Peak Performance” is a silkbind attack that readies your shield for incoming attacks; getting hit fills your phials to maximum, priming you for the ultimate counter attack.

Rhythmic, heart-pounding hits. The Hunting Horn smashes through the charts with powerful moves that stun monsters and buff your hunting party!

“Earthshaker” is a head-pounding beat silkbind attack that drives an Ironsilk-bound blade into the target like a stake. Sonic vibrations explode inside the target causing big damage!