Super Mario Sunshine: How To Get Rocket Nozzle And Unlock All Nozzles

Super Mario Sunshine is releasing on the Nintendo Switch as apart of the 35th anniversary of Mario.

The classic Nintendo Gamecube game is one of the best games of all time.

If you are looking to turbo dash or blast away like a rocket you are going to need new nozzles.

Here's how to get them!

This is the first one you will be able to unlock, and you will need 25 shine sprites in order to do so.

Once you beat episode four you are going to head back to Delfino Plaza.

This is the process in order to unlock Yoshi, which we cover here.

Basically, you will have to chase down Shadow Mario and spray him down until he releases the egg.

Feed the egg some fruit which can be found at one of the nearby locations, and Yoshi will hatch.

Now, you will be able to ride Yoshi around. 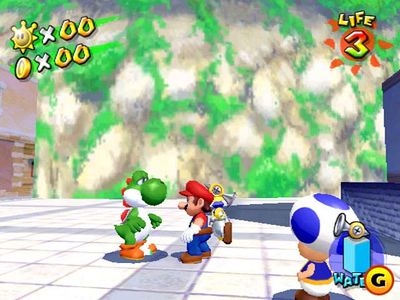 Climb atop of Yoshi and head over to the building with the clogged pipe on top of it.

You are going to want to lose all your lives so you respawn in front of Shadow Mario once again.

This time around Shadow Mario will have the turbo nozzle!

Make sure you have 30 shine sprites before trying to get the Rocket Nozzle as it will not appear before.

Then once you head back to Delfino Plaza, Shadow Mario will once again be there; but this time with the rocket nozzle.

Dash around to the building he is atop of, and spray him down with some water in order to get the nozzle!