Ubisoft's Battle Royale is getting some big changes with its second season.

Players can expect new map areas, a new weapon, a new hack, and, of course, plenty of cosmetics to hunt down as part of the game's battle pass.

So, when can we expect it?

HyperScape will be having a Season 1 Finale Event TODAY!

Be sure to hop in-game and let us know your thoughts on the epic event. 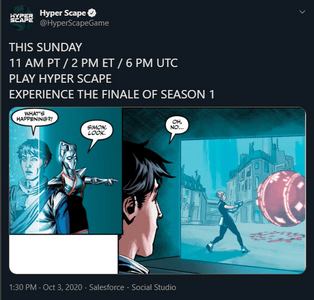 Season 2 kicks off on October 6, meaning it's almost here!

The update will begin at 2pm BST and last for about 90 minutes.

Players will get a free Daily Gift just for logging in for Season 2, as well.

Check out the Season 2 gameplay trailer below:

You can read the full patch notes here.

Check out the Battle Pass trailer below:

We can expect the same for Season 2; along with the following items:

Ubisoft has teased that the "Season 2 Premium Battle Pass includes exclusive items inspired by the Assassin’s Creed brand, including a Champion outfit and a deployment pod".

We can also expect the battle pass to feature 100 tiers of content for players to unlock the more they play!

The new Memorial location offers an easily identifiable domed roof and plenty of levels to battle on.

Players can get onto the roof, too, and hop through the windows.

Starting with Season 2, the format in which the Game Modes are available to play will change to offer a choice between a more competitive& ranked mode, and a more arcade one.

The CROWN RUSH SQUAD tile is going to be the RANKED mode (when you play in that mode you will earn ranking score). This mode will be present for the whole season.

The second game mode tile will offer a more ARCADE-oriented playlist that will ROTATE EACH WEEK. Those arcade modes will NOT BE RANKED (they will not earn you ranking score) and will offer a less competitive experience.

The Season will start with FACTION WAR as the arcade mode, and then change each week during the Season.

Limited-time modes will no longer appear as a third tile and are effectively replaced by the arcade mode rotation.

While this means a permanent SOLO MODE WILL NO LONGER BE ALWAYS AVAILABLE, it will be part of the rotation in the arcade playlist.

Modes in Season 2 include the following:

It also looks as though there will be a Halloween mode, but we don't know exactly what it'll involve just yet!

Season 2 will add the new Atrax weapon, which fires blobs of green goo.

The Atrax is a full-auto rifle which shoots sticky explosive projectiles.

The chemical projectiles from the Atrax will detonate instantly when hitting a Contender, but when hitting an environment surface, they will instead stick to it and detonate shortly after.

Any enemy target caught within the Area of Effect of the explosion will suffer damage and a short slowdown effect.

The Atrax is an efficient and versatile weapon, but it has a very limited magazine clip size, so watch your ammo count closely!

Hyper Scape is getting a new Hack in Season 2 - Platform.

It will allow to deploy a small platform near you, to cross large streets of build temporary vantage points. Platform Hack has the shortest cooldown of all Hyper Scape hacks with a minimum cooldown time of 3s at full fusion!

You’ll be able to create platforms easily but be careful as it is quite fragile, and any damage will destroy it.