PS5 September Showcase: Date, Times, Livestream, Where To Watch, What's Being Shown And Everything We Know

One For The Books!

The console wars of 2020 are starting to kick into overdrive.

With Microsoft revealing the Series S along with the long-awaited price; the ball is now in Sony's court.

A new showcase has been revealed and we have all the details you could need to know!

To be more specific it will be beginning on September 16th at the following times: 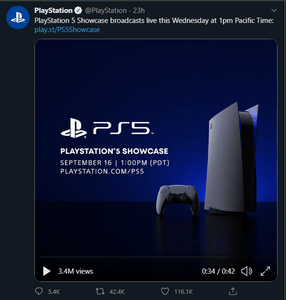 You will be able to check out the showcase on either PlayStation's Twitch or YouTube accounts.

What's Going To Be Shown

Although we do not know the specific details of what is going to be shown.

The official blog post from PlayStation regarding the showcase noted the following:

"Before PlayStation 5 launches this holiday, we wanted to give you one more look at some of the great games coming to PS5 at launch (and beyond!)."

"Our next digital showcase will weigh in at around 40 minutes, and feature updates on the latest titles from Worldwide Studios and our world-class development partners."

We can speculate we are going to get more news on first-party games from Sony.

Titles such as Spider-Man Miles Morales and Horizon Zero Dawn 2 are likely candidates.

Perhaps the most speculated aspect of the PS5 that is going to be revealed is the price.

After Microsoft announced the Series X and Series S prices, Sony looks to counter with the PS5's.

Not only will we likely see the price of the PS5 revealed, but we can also assume we will finally get a release date.

For those who do not know, the Series X/S will be releasing November 13th.

We wonder if Sony will release it on the same day or relatively close!

How to Get Bot Lobbies in Chapter 2 Season 5 Fortnite