Black Ops Cold War: Is The AK74u The Best Gun In The Game?

As we return to the Cold War era, we're going to be reunited with familiar faces, settings and weaponry.

Black Ops Cold War is bringing back a few franchise favourites including the AK74u.

If you were watching the multiplayer reveal, it will have been the first time you've seen the weapons that will arrive this November.

However, you may be familiar with this deadly weapon already from past games.

You may have noticed that it was being sported by a number of players and very regularly the focus on gunfights - there's a good reason for that.

Is The AK74u The Best Gun In Black Ops Cold War?

The AK74u has rarely featured in a Call of Duty game and not been a standout weapon.

Its second incarnation arrived in Black Ops 1, where it was so strong that it actually had to be nerfed.

History has a habit of repeating itself and it could be the case once again.

It was evident based on the gameplay in front of us that this was an exceptional weapon and while there may be other weapons in the game that can compete, this one provided an edge.

@CourageJD has also claimed that the submachine gun is "the best weapon", after just 6 hours playtime.

But, then again, he reckons he's better than the 2017 World Champion Scump... 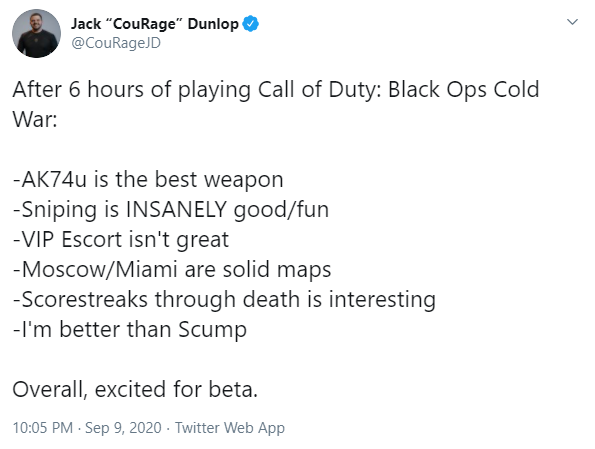 With the ability to now add 8 attachments to a weapon, thanks to the addition of Wildcards, Treyarch has got a very tough task ahead of them in terms of weapon balancing.

An open beta is scheduled to begin on the 8th October, so we can expect another round of changes to arrive before then.

Interestingly, Modern Warfare had the least changes made to weapons from the beta to full release; something that is very rare.

From my own personal experience, a gun that is great in an early build is rarely as impactful once the game has launched.

In this scenario, only a few players have tested it and it may not be enough data to establish big tweaks.

Treyarch will be wise to listen to what this selection of playtesters had to say - they've already made a great impression on the community, let's hope it continues.