2020 is looking much brighter with this news...

Nintendo shocked us all this week with the announcement of a new Zelda title.

Hyrule Warriors: Age of Calamity aims to tell the story of how Ganon came to power 100 years before the events in Breath of the Wild.

Not long after the announcement came, a second has followed informing us that we can expect an extensive look at gameplay!

Read More: Hyrule Warriors: Age of Calamity: Release Date, Trailer, Gameplay, Characters, Price, Story, Screenshots And Everything We Know About The Breath of The Wild Prequel

Nintendo has confirmed that we will be getting another look at Hyrule Warriors: Age of Calamity this month.

In a tweet, they confirmed the date is the 26th September - which falls during the 2020 Tokyo Game Show.

"Excited about the reveal of #HyruleWarriors: Age of Calamity and eager to learn more? You won't have to wait long! We'll be sharing another look at the game on 9/26. #Zelda #NintendoSwitch". 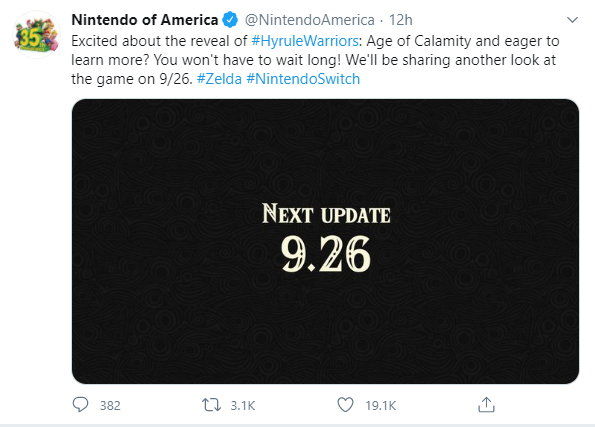 Not much else is share, but the TGS 2020 schedule indicates that we're getting a 50-minute live gameplay stream!

According to Gematsu, the schedule details "First live gameplay of Hyrule Warriors: Age of Calamity, as well as all sorts of the latest information such as character introductions by the development team. Featuring MC Ruriko Aoki, Yosuke Hayashi (producer), Masaki Furusawa (producer), and Ryouta Matsushita (director)."

We're confident that the character introductions will be more about their abilities rather them as characters, as they all heavily featured in Breath of the Wild; but there could be a few surprises thrown in there.

It's likely we'll get a full level playthrough from the game, which will provide little teasers of what's to come (both from a gameplay and story perspective).

We may also get a better idea of what state Hyrule was in before the Calamity and how Ganon and his army impacted the surrounding environments.

The recent trailer gave us an idea of the notable locations we will visit and when compared to Breath of the Wild already give us some interesting facts about what happened all of those years ago.