Red Dead Online: The Halloween Pass Confirmed - Rockstar Games has at long last confirmed what they'll be doing with the game this Halloween.

The Halloween Pass is available now until November 16, 2020 and includes all of the content seen in the new trailer just dropped by the famed GTA developer.

Stay tuned for more details shortly. This is a breaking news story.

That being said, October is nearly upon us, so those still playing Red Dead Online can at the very least expect some sort of Halloween festivities in the game.

In 2019 this came in the form of a new limited-time event. Fear of the Dark. A terrifying new addition to Red Dead Online's many Showdown Modes pitting supernaturally fast, tough and strong Night Stalkers against mere mortal Hunter counterparts.

There was also a variety of free and exclusive versions of the Freak and Horror Mask available too.

However, for 2020, it seems as though Rockstar Games could be pulling out all the stops and plotting something even more spectacular. 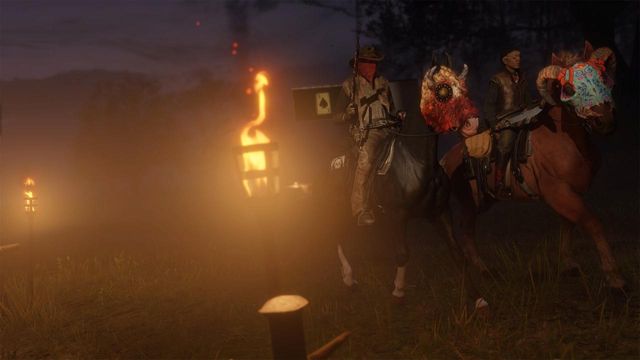 Like all Outlaw Passes, we suspect the Halloween one will feature various levels and unlockable cosmetics, but it's not clear just yet how extensive it will be.

Some of these new cosmetics have already leaked online, with Saiyam on Twitter sharing some images well ahead of time.

There's everything from new clothes, bloody bandages, spooky weapons, and even a mask for your horse. It looks like there will also be some new Halloween themed decore for the Moonshine Shack.

You can take a look at all the leaked images, below:

When players starting digging through the files and discovered the new Halloween pass, they also noticed that the current Outlaw Pass is scheduled to end on October 19th.

So regardless, it's certainly not coming before then.

Will it arrive immediately after? That's hard to say, but we think its more likely the new Halloween outlaw pass arrives closer to the end of the month when Rockstar typically launches its Halloween-themed content.

So we think it's possible we could see the new Halloween outlaw pass launching on Tuesday, October 27.

Of course, stay tuned to the Gfinity Red Dead Redemption hub for everything you need to know and all-new reveals in the coming weeks.

The YouTube channel Red Dead Guides has given fans a look at a new batch of content that could be dropping soon for Halloween.

The video appears to show a series of zombie models that will be added to the game at some point soon.

This, we are told, is dubbed the "Army of Fear".

Have a look below and click that link for more info!

Don't Miss Out! Head over to Amazon to bag yourself some more gold bars!