How to get around in this year's CoD.

Black Ops Cold War will arrive later this year, and as we get closer to launch and an Open Beta, we'll find out if vehicles are making a return.

They weren't a part of Modern Warfare 2019's multiplayer, but Black Ops has often been more adventurous.

Even if Black Ops Cold War's multiplayer doesn't include pilotable vehicles, there's always the chance the next incarnation of Warzone will!

Here's all we know so far.

Vehicles will return, complete with their own skins. Here are the confirmed vehicles:

Warzone is the franchise's new free-to-play battle royale, but Ground War offers large maps and objective-based combat - or at least it does in Modern Warfare.

We know about these because the Land, Sea and Air pack will include vehicle skins.

The "Red Bear" skin appears to be for a tank, while the "Leviathan" skin is for a boat (with the lighthouse in the background reminding us somewhat of Blackout's map from Black Ops 4).

Finally, the Death Dealer skin is made for a helicopter, and also sounds like a metal band.

You can check each out in the image below. 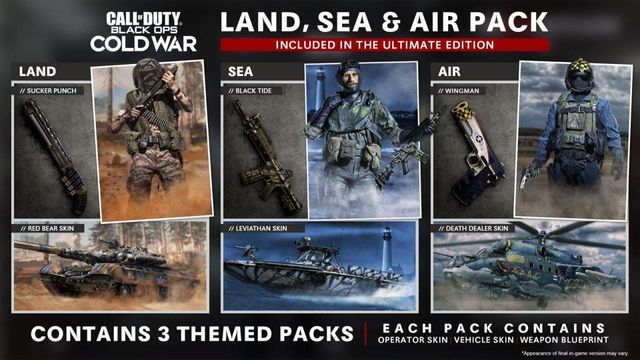 We also know that snowmobiles are joining the vehicles too.

While tanks aren't exactly known for their speed, we'd expect something a little faster to help out in battle royale, perhaps a jeep?

With the game being set in the Cold War, we're also hopeful of being able to use the SR-71 Blackbird in some capacity, although it's ridiculous speed makes it likely to be a killstreak at best.