Overwatch Halloween 2020 Event: When does Halloween Terror start this year?

Overwatch 2 might be still quite far away from release, but another seasonal event for everyone's favourite hero shooter should be just around the corner.

The annual Overwatch Summer Games recently called time and fans might notice that there's a bit of a chill in the air.

This can only mean one thing. It's nearly time for Blizzard's band of heroes to get a little spooky and don their best costumes for another year of Halloween Terror.

As one of the original events from the games first year, it seems there's still plenty of appetite from fans to see more haunting hi-jinx. So we're already looking forward to the return of Junkenstein's Revenge and the onslaught of Zomnics once more.

Naturally, those who love the spine-tingling skins will also be keen to see what the developers have planned for the fifth incarnation of the eerie event. We've had plenty of the normal Halloween skin ideas, such as a Mercy Witch and Reaper with a pumpkin for a head. So we can't wait to see what Blizzard creates next.

Most importantly for now though, fans will likely be asking what day the event go live? Thankfully, we may have the answer courtesy of the launch times from previous years. Read on, if you dare... 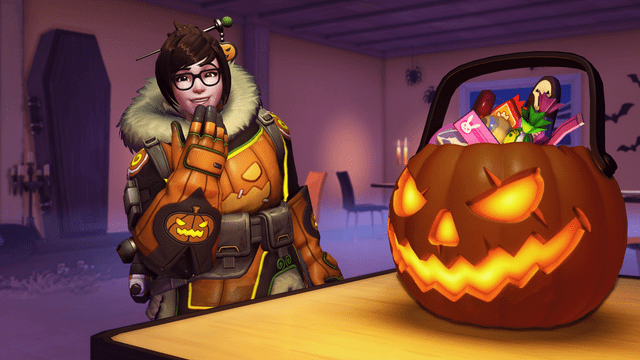 When does Overwatch Halloween Terror 2020 start?

The Halloween event will start on October 13 and will end on November 3.

Keep reading for everything you need to know about skins and what else to expect, for now, you can watch the new trailer, just below!

Update - 5th October - Well, there's still no info on the start date from Blizzard, making that potential Thursday, October 8 start time increasingly unlikely. With this in mind, expect to see some leaks or announcements this week with the event potentially beginning on Tuesday, October 13, 2020.

Curious how we arrived at those dates? The below from our original story should be able to explain.

Original Story - We're still a few weeks away from the start of Autumn, so, for now, Blizzard will naturally remain tight-lipped on when the event begins or what new skins they might have planned for release.

However, Overwatch seasonal events normally operate like clockwork. There's a fairly consistent pattern to when they begin and go live. So we simply need to look at past years to work out when the spooktacular event will kick off in 2020.

In the past, Overwatch's Halloween Terror event has started on the following dates:

As you can see, there's only one real outlier which came in 2019. However, we're fairly confident that the delay had more to do with Blizzard launching the event at the same time for when the game launched on Nintendo Switch.

To make things even easier, Overwatch events typically drop on Tuesdays or Thursdays, which is when Blizzard usually release their major updates.

With this in mind, it seems a good bet that Overwatch Halloween Terror 2020 event will begin on Thursday, October 8, 2020. We can't foresee it starting sooner, but there's an outside chance of a later start on Tuesday, October 13, 2020.

Right now it's impossible to say with certainty which Overwatch characters will receive new legendary skins to honour the event.

But there is something we can do to narrow the field of vision to work out which characters seem most likely to receive new Overwatch Halloween Terror Skins.

Keen to know more? We've pulled together a complete overview looking at which Overwatch heroes are most likely to be in line for a new skin.

Plus, we found a few excellent fan-made concept skins which showcase some new styles that would fit the season perfectly.