Marvel's Avengers Review: Caught Between A Hulk and A Hard Place

Marvel's Avengers is the kind of divisive game that only rolls around a few times every generation. Like Death Stranding, Pokemon Sword and Shield or even The Last of Us Part 2, it's sure to be loved by many and derided by others.

Taking the team behind the excellent Rise of the Tomb Raider and setting them to work on a Destiny-inspired loot-driven live-service game starring Earth's Mightiest Heroes may sound like a licence to print money, regardless of the game's quality, but there's a lot to enjoy here. Unfortunately, there's also a disappointing amount of post-game filler.

Given the breadth of content on offer in Avengers, we're going to divide this review up into single-player and multiplayer segments, with an overall score.

Like the Marvel Cinematic Universe that Square Enix and Crystal Dynamics have done their best to distance themselves from comparisons with, Marvel's Avengers' single-player campaign is full of action, and no small amount of heart.

Picking up on A-Day, a day where the Avengers failed, the world turns its back on our heroes and into the waiting arms of George Tarleton, a brilliant scientist and all-round nefarious chap. Looking to harness the power of "Inhumans", gifted individuals created from the fallout of A-Day, Tarleton believes in a world where science prevails of superheroes.

While his arc is pretty standard fare for a comic-book supervillain, our protagonist Kamala Khan's journey is much more effective. An inhuman herself, Kamala begins investing whether the Avengers took the fall for someone else's machinations. 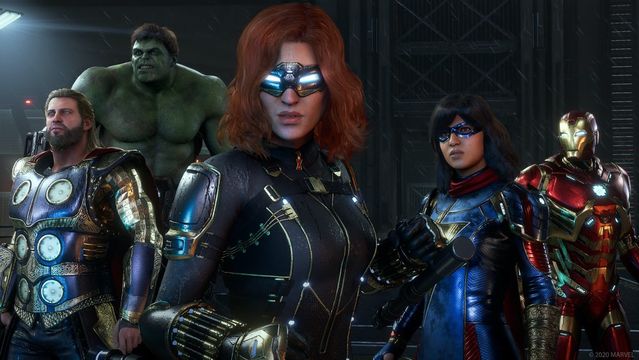 Sure, they're not the MCU Avengers, but we came to love them almost the same

While nothing from the plot rises above the predictable, the entire experience is elevated by Kamala's wide-eyed optimism, bought to life vividly through Sandra Saad's pitch-perfect portrayal. There are undoubtedly some clunky dialogue sequences, but Kamala feels truly human in a world of superheroes and robot armies.

She's also great fun to play as, with her stretchy limbs and ability to grow to gigantic size making her feel like a breath of fresh air compared to the move sets and MCU-lite characters that form the rest of the main cast.

That said, while each of the core Avengers takes some time to differentiate themselves from their most famous versions, there's no doubt that they too are given plenty of time to shine. Troy Baker and Nolan North predictably bounce off of each other as Bruce Banner and Tony Stark respectively, while Laura Bailey is expectedly a great Black Widow.

Spending time with these characters and watching them bicker, tease, and come together is one of the best parts of the campaign, but that's not to say there isn't fun to be had controlling each one.

Each Avenger has a unique move set, and while I gravitated towards Hulk as my main (thanks to the ability to swing enemies around, "Puny God" style), other players have found themselves drawn just as heavily to others. Compared to something like Destiny's very homogenised classes, it feels great to battle through huge swathes of enemies with a multitude of fighting styles, even with AI companions.

Mission structures, however, leave a lot to be desired. While combat is flashy and gets progressively deeper as you plug away at the impressively detailed skill trees, even single-player levels feel built with multiplayer in mind. One particularly frustrating section has Iron Man trying to hold a point on the map, thereby restricting his ability to fly. These kinds of bizarre choices are peppered throughout, but none stands out more than the game's loot system.

Throughout the single-player campaign, each character can earn loot to fill one of four slots. These can then be swapped out as new loot is found, or upgraded via a myriad of materials. While the likes of Destiny and the Division at least offer distinct visuals for each piece of new gear, Marvel's Avengers goes the Anthem route by divorcing visual and gameplay customisation entirely. That means whatever gear you equip, you'll look exactly the same at level 1 as you do when you finish the campaign.

That's a shame, and while a handy "equip best gear" shortcut means newcomers won't have to worry too much about it getting in the way of their experience, it just feels like a box to be ticked, similarly to the way Ghost Recon: Breakpoint implemented gear last year.

Thankfully, there are glimpses of Crystal Dynamics' undoubted flair for set-pieces. Whether it's Iron Man flying through a canyon while artillery rains down, or Hulk leaping from wall to wall and smashing enemies and destructible environments as he goes, or even just Kamala using her elastic arms to swing across collapsing environments, there are plenty of "wow" moments. 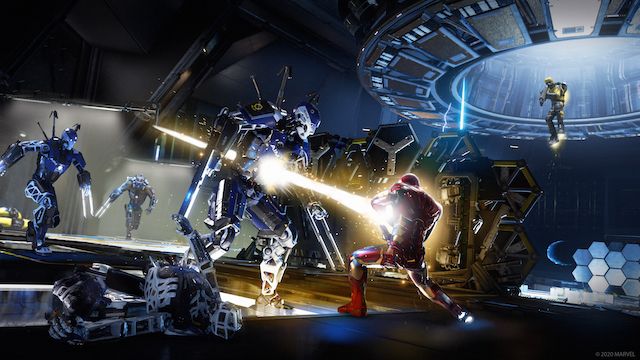 Combat gets much better the more you play

Of course, as with any live-service title, the real meat of Marvel's Avengers is intended to be what happens after the campaign's conclusion, and here's where the loot system is intended to come into its own.

Unfortunately, because of the lack of any game-changing loot and endgame content, it's tough to recommend for anyone looking for this to be their new "hobby" in the way that Destiny 2 or The Division 2 can.

War Zone missions are where you'll spend much of your time squadding up, and while they're fun for the same flashy combat from the single-player campaign, it's not long before you've seen everything each has to offer. Expect identikit enemies, familiar locations, and reused assets on a constant basis.

That's a shame, especially given the over-the-top comic-book narrative that permeates the single-player missions is essentially stripped out, and while completing objectives for your Hero Challenge card will offer you skins and cosmetics as a reward, being unable to unlock any game-changing loot means you'll be relying on the skill trees and stat boosts to tailor your character.

The more challenging missions, known as Hives, are essentially floor-based Horde modes that reward better gear the further you get. As it stands, it's the best way to grab better items for your characters, but again, once you've run the same mode once or twice, there's little incentive to return.

Then there is the huge number of technical issues. Marvel's Avengers is frequently a very good looking game, but frame drops are common in both 4K and performance modes on a PlayStation 4 Pro, while its performance on a base PS4 feels almost unplayable at times. These are likely to be things ironed out in the coming weeks, but audio dropping out, the occasional textures not loading in cutscenes and some very long loading times feel tough to excuse for a game of this size and budget.

Marvel's Avengers' saving grace is in its standing as a live-service title, meaning it could feel like an entirely different game in the months to come. Controversial Spider-Man PS4-exclusivity aside, there's the potential for the game to become a real platform for Marvel fans well into the next generation. Unfortunately, it's tough to swallow the lack of endgame content for a live-service game, especially when there are so many examples of games within the genre launching with similar issues.

For now, though, technical issues and an unfulfilling loot system make Marvel's Avengers feel less than the sum of its parts. It's undoubtedly a good game, and in time is likely to be great, but for your money at this moment, we'd suggest taking a little time to see if it's worthy.

If you're looking for a fun, comic-book adventure with stirring performances, however, the game's overlooked campaign is by far the strongest part of the team.

Review Copy Provided By The Publisher
Reviewed on PS4 Pro