With just a few days until the worldwide multiplayer reveal for Call of Duty: Black Ops Cold War, a brand-new teaser pinpointed some of the locations that players will be heading to in Treyarch’s new multiplayer experience.

Crafty data miners managed to uncover codenames for some of the multiplayer maps, and with the release of this teaser, it gives us a chance to see whether they were right all along.

So where exactly are the maps set?

WELCOME TO MIAMI!: This is the first confirmed multiplayer map for Black Ops Cold War

After gameplay from a closed alpha test appeared on social media, it looked like a revamped iteration of Black Ops 2 map Plaza.

The data miners had confirmed that a map set in Miami was going to be in the game, and it looks like they were correct.

The latest video counting down towards the multiplayer reveal on September 9th showed a number of dots, seemingly revealing the location for some of the maps and one of them was on Miami.

Rumours suggest that Miami is a return to a classic three-lane map design, with three distinct areas ranging from built-up areas for close quarters engagements and a wide-open stretch of beach ideal for snipers to make an impact. 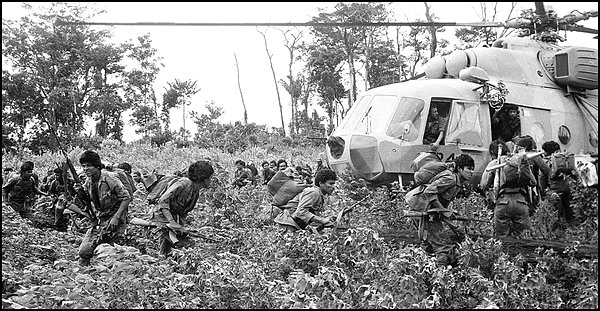 CAMPAIGN LINKS: With campaign missions set in Nicaragua, a multiplayer map makes a lot of sense

Alongside Miami, another red dot can be seen south-west of the city.

After some research, the dot matches with the nation of Nicaragua, a location which has appeared within the campaign game files which were uncovered by data miners.

Data miners also uncovered a map named Cartel. Could this map be set in an abandoned mansion which a cartel has had to escape due to the Nicaraguan revolution?

Theoretically, there are numerous areas of the country regarding the potential setting of the map, but with the Nicaraguan revolution taking place during the Cold War, a map set in a war-torn city could well be on the cards. BERMUDA: It played a key role in the Cold War, and the Naval Dockyard looks like a perfect setting for a map.

The third and final dot that can be seen on the teaser was a little harder to track down but we believe that there will be a map set on the island of Bermuda!

Those crafty data miners didn’t find any codenames detailing a map set on the island earlier in the year, suggesting that this particular map has yet to be added into the final build of the game which releases on November 13th.

Bermuda played a key role in detecting any movements from Soviet nuclear submarines during the Cold War.

With the Royal Naval Dockyard being the main base of the Royal Navy during the Cold War, a map set within a dockyard is likely to appear.