Fall Guys Hit Parade: How To Win, The Slime Slope, Strategy Guide, Tips And Tricks And Everything You Need To Know

Fall Guys is all anyone can talk about and you may be having issues getting a crown.

Season 2 isn't far off and will bring plenty of new stages, so it's important you master the old ones.

Hit Parade, is one of the easier races, meaning you'll have more competition to contend with.

With the right timing and strategy, you should be able to fly through

Here's our guide to Hit Parade.

What Is Hit Parade?

Hit Parade is a race stage and pits you against all other players in the lobby.

Every bean starts at one end of the stage and must make it to the other end, but there are a series of obstacles in the way.

These obstacles are designed to hit you off the stage and disrupt your path.

Your mission is to avoid these obstacles and make it to the finish.

How To Get Up The Slime Slope

The Slime Slope can be very tricky to deal with.

We recommend staying to one of the sides of the slope as this will give you the easiest path up, due to the fact that the moving obstacles will not overlap.

You can quickly and easily move towards the centre to get around these obstacles.

You're also far less likely to bump into other players. 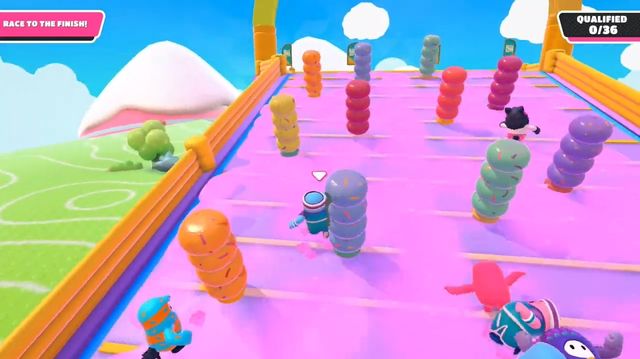 Ideally, you want to be at the start of the pack to give you a clear run over the first part.

The beams will be tough to navigate with loads of beans piling on and bumping into each other, so if you're towards the back try to pick a less populated beam.

When you reach the end of the blue beam, avoid jumping into someone as you transition to the orange beam.

Go With The Spinning Doors

You should move with the spin of the doors as this is the easiest route through this section; if the door hits you in the back, they will give you a small speed boost.

If you're not leading the pack, you should aim for the middle of the doors as this is where everyone goes. It's also where the doors to the next section open.

But, if you are leading the pack, you can disrupt a lot of players behind you by going via the outside route. This will cause the doors to turn against the movement of players and push them back, forcing them to follow the path you set.

Stay Out Of The Centre Of The Pendulums

The Pendulums aren't too tricky to navigate as long as you stay out of the centre. Very quickly they will be high enough that you can walk right under them.

You want to be standing roughly in the middle of the edge and centre so you can navigate around the pendulums.

In truth, you should be able to run straight past the first two. It's the next two that can obstruct your path and may require you to slow down and veer out of the way.

If you're still going, it should be a straight dash past the next three.

As detailed above, the Slime Slope can be very tricky to deal with.

We recommend staying to one of the sides of the slope as this will give you the easiest path up the slope, due to the fact that the moving obstacles will not overlap.

You can quickly and easily move towards the centre to get around these obstacles.

You're also far less likely to bump into other players.