Black Ops Cold War is the latest installment in the Call of Duty franchise.

We are patiently waiting for the multiplayer reveal which is slated to kick off later this week.

A series of leaked gameplay from the close alpha hit social media over the week, but David Vonderhaar has hinted towards something massive.

With the multiplayer reveal coming in just a few days; he has been pretty active on Twitter.

It is unknown how the leaked gameplay footage appeared over the week; but most of us have seen it by now.

Although the leaked footage was only two minutes long, it has been a talking point among fans over the week.

In a thread started by Vonderhaar on Twitter; he hints that we are in for a massive multiplayer reveal this week!

DylanDumpling88 replied to one of Vonderhaar's tweets noting that "We already saw...", referring to the leaked gameplay footage.

Vonderhaar replied to Dylan with the following image! 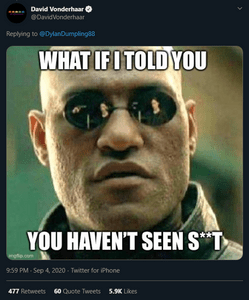 Vonderhaar's tweet is not only funny, but it is also a massive hint towards the upcoming multiplayer reveal.

How much have we actually seen from the multiplayer? Treyarch has been known to go all out with each they release, and Black Ops Cold war has the potential to be the best in quite some time.

It is unknown what they plan on showing us during the reveal.

But we cannot wait to see!