Call of Duty: Black Ops Cold War is launching in November, but half of the fun of last year's Modern Warfare reboot came in the form of post-launch content.

New weapons, modes, and even the incredibly popular Warzone were patched in after the game had released, so what can we look forward to with Treyarch's title?

That should keep the community stronger by not dividing players between the "haves" and "have nots" like map packs used to.

Instead, we'll be getting another Battle Pass as an optional purchase.

The pass will again be intergrated across both the regular multiplayer and Warzone each season.

Fortunately, your cosmetics and items from Modern Warfare will carry over into the new version of Warzone.

The Battle Pass System will again include free tiers, which will include new weapons and other categories of items players can earn by playing the game.

The Battle Pass and Store will feature plenty of cosmetic content such as Operators, Weapons, Blueprints, Player Identity items, and more.

There will not be a Season Pass model. Post-launch Multiplayer maps and modes will be free and given to all players simultaneously on all platforms.

As with Modern Warfare, new content will be free for all players.

We'd assume that weapons will be earned through the free battle pass (just as they are currently), with the premium pass allowing bonus cosmetics.

Activision and Sony are shacked up again, and that means if you're playing on PlayStation 4 or PlayStation 5 you'll be getting some added goodies.

While these can often come in the form of cosmetic drops through PlayStation Plus, they're also more substantial.

What We Already Know 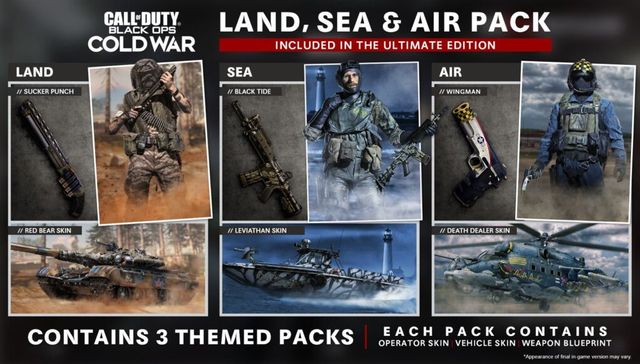 While we know that this pack will come with pre-orders of Black Ops: Cold War, Activision hasn't revealed what's in them... yet!

While some Twitter users have been noting various "Content Pack" downloads being added to their console when pre-ordering the game, these are unlikely to be anything to do with DLC as Modern Warfare had a similar situation last year and essentially used these downloads as install files to make up its mammoth file size.