Black Ops Cold War is the name of the new Call of Duty title for 2020.

As we get closer to launch we now have some news regarding the Open Beta.

A new leak has surfaced which has all but confirmed the release date for the beta.

Posted on Twitter by user INTELCallofDuty which was sent to them by Blitzeys; the two images which we have posted below are from the Call of Duty WW2 store.

The store is advertising Black Ops Cold War; and it has links that takes you to the PlayStation Store to pre-order the game. Which gives you access to the Open Beta.

The blurb of text on the side is where the release date is leaked, as it notes the following:

"Pre-order any digital edition and get: - Early access to the Open Beta begins on October 8th. First on PS4*" 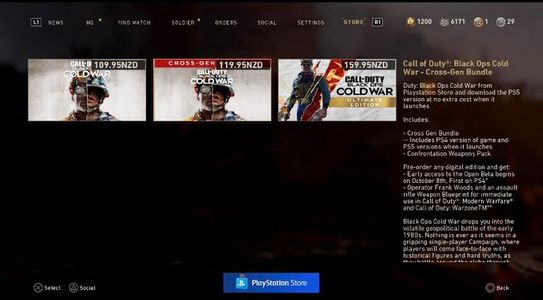 As you can see in the above images, it appears they have accidentally leaked the release date for the Open Beta which is slated to kick off on October 8th!

We have yet to see an official post from Treyarch regarding this, but since it was spotted on the in-game store; it is hard to say if this is false!

Keep your eyes peeled over the coming days as an official announcement may be coming soon.