Find the best loadouts for this FiNN-tastic weapon.

Season Five Reloaded for Modern Warfare has gone live across all platforms and has bought in a wealth of brand-new content for players to get their teeth stuck into, including the addition of the FiNN light machine-gun (LMG)

Unlocked by scoring a single melee kill with an LMG in seven matches, the latest addition to the weapon arsenal

In this article, we share three loadouts that will have you dominating the opposition in no time at all! 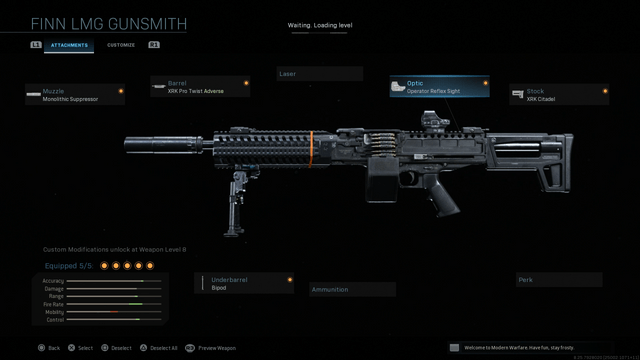 Perfect for launching a deadly ambush onto unsuspecting opponents, this loadout is perfect for making high-impact plays without making too much sound.

This attachment combination provides some much-needed sound suppression alongside increased stability when firing on all cylinders. The bipod is a great addition, reducing recoil when crouched or prone, giving you maximum control regardless of your stance.

Although this perk combination leaves you vulnerable to utility damage, the additional mobility provided from Double Time enables you to navigate the map with ease, compensating for the slow-moving LMG. Ghost keeps you hidden from any enemy UAVs in the air, allowing the possibility for flanks, and Tracker is perfect for locating enemies and setting up an easy kill.

This combination of utilities is perfect thanks to its multi-purpose nature. The C4 can be used to take down multiple enemies in quick succession or to destroy any land-based killstreaks while the smoke grenade can make for ideal cover on an objective or it can be used to lure the enemy into a false sense of security as you emerge from the mist and unleash a wave of bullets onto their location.

To make the FiNN a FiNN-tastic machine gun, equipping stopping power rounds as the Field Upgrade is the way to go. The increase in damage will drop an opponent in just two bullets!

The cruise missile is great for a quick hit onto an enemy in the open while the sentry gun can be placed in a variety of positions to deal unprecedented levels of damage. As for the chopper gunner, we’ve all seen the devastating impact that it possesses so it makes plenty of sense to be using one to score those high-kill games. 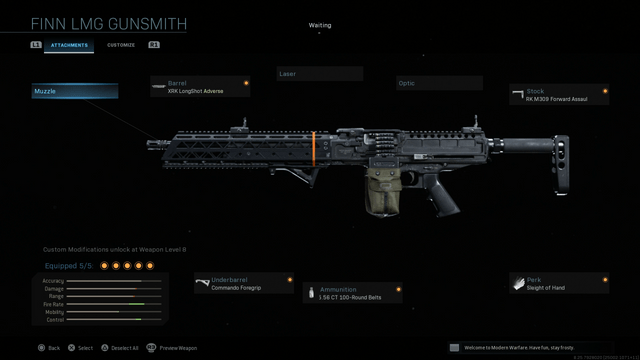 Loadout number two is all about going loud and getting in amongst the action.

This particular attachment combination is possibly one of the best we have used throughout Modern Warfare. The adverse tuning on the barrel provides the machine gun with a FiNN-omenal rate of fire while the additional bullets in the magazine reduces the need to reload after every engagement. When that time does come, sleight of hand makes that process much faster, allowing you to get straight back into the action.

With this loadout being geared towards being in the heat of battle, it is likely that you will be dying more frequently, which is why Hardline has been selected. With killstreaks needing one less kill to earn, it is still possible to be earning those high-tier streaks. EOD and battle hardened provide some much-needed resistance to any lethal and tactical equipment that the enemy will use to stop you in your tracks.

This is a more traditional utility combination. The Semtex offers a bit more precision thanks to its sticking ability while the flash grenade is ideal for throwing into a congested area, blinding the opposition, and giving you the perfect chance to take all of them down before they realise what has hit them.

When in the action-packed areas of the map, the constant wave of grenades flying everywhere can often lead to a premature end to your rampage. Throw a trophy system down in front of your location to prevent some of the grenades from dealing any unwanted damage.

This killstreak combination is rather self-centred but will lead you to scoring a load of kills. The personal radar is ideal for flushing out any enemies that could be lurking in a corner, the cluster strike is perfect for placing on any objectives where there is little to no cover, and to top it off, the agile wheelson is more than capable of decimating an enemy set-up. 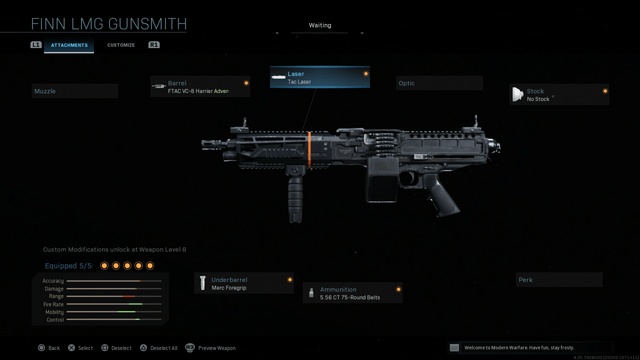 The third and final loadout may look underwhelming in the Gunsmith, but once you have tried the machine gun, it will certainly turn you into a FiNN-atic.

With a heavy focus on mobility and aim down sight speed, this attachment combination is the most mobile iteration of the FiNN possible. It’s easy to use at all ranges and with the adverse effect of the barrel, it’s rate of fire is off the charts.

To further increase the mobility, double time is the perfect addition to traversing the map quickly. High alert increases your awareness, flashing a light on the screen when an enemy has spotted you while tune up decreases the recharge rate of your field upgrade, meaning you can have access to it much more often.

It is hard to go wrong with a frag grenade. A frag cooked to perfection is almost always impossible to avoid often guaranteeing a kill. The selection of stim may be controversial but the additional burst of health can often be the difference between remaining in the action with your comrades or respawning all the way out of the chaos.

Thanks to the boosted rate of fire, ammunition on this loadout can run down extremely quickly. Drop a munitions box for additional ammo and grenades and give your teammates a chance to resupply too.

Geared towards the higher end of the killstreaks on offer, this combination is all about delivering a high impact. Place the airstrike where there is nowhere for the opposition to seek cover, call in the VTOL to patrol the open areas of the map, and before you know it, you’re high in the sky dealing a rain of fire from above in the gunship.