NBA 2K21's demo has finally made its worldwide premiere today, and players all over the world are jumping in to check out this year's title.

Although there an ample amount of 2K veterans playing the game, this may be your first time checking out the series.

So, mastering the controls should be your top priority!

Perhaps the most basic component of basketball is dribbling, and in NBA 2K21 it can be as simple as just moving your LS forward.

Or, with clever usage of the RS or Pro Stick; you can muster some insane dribbles together.

There are an ample amount of moves that players will be able to perform, from devastating crossovers to ankle-breaking moves; here how to do a few of these in 2K21!

Thanks to usgamer.net we are able to view all of the controls from 2K20 that will undoubtedly be the same for this year's game.

As well, here are some of the new controls for 2K that have been announced:

Your Signature Size-up is a series of rapid dribble moves that certain players use that can trigger your defender to bite on one of them. Leaving an opening to drive to the rim or pass it to a teammate.

Some players such as James Harden and Kyrie have some of the best size-ups in the game, and using them in the right scenarios can lead to some easy points. 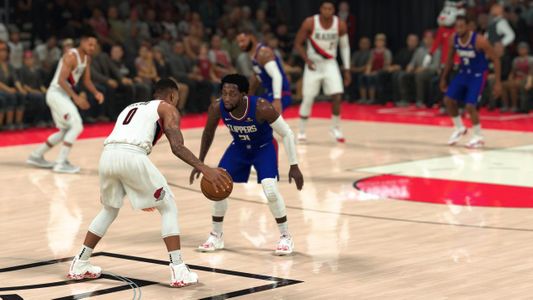 With the ample amount of dribble moves and combos you can pull off in 2K; one can find it tricky to know when to use a behind the back or a size-up.

The best advice we can give you is to practice using the RS and the different types of moves you and your player can perform.

Finding the right flurry of dribble moves; can be the difference between getting past your defender!