Fall Guys has taken the internet by storm in recent weeks, as players battle to be the last person standing.

Although this game has only been out for a short time, the developers are already rolling out a massive update.

This next update comes out just a week after the most recent one launched on the 20th August.

Along with many quality of life changes, this update fixes a big exploit that was present on the Jump Showdown game.

Here are all the bug fixes and changes coming soon!

The official Fall Guys Twitter account posted the following image, which details all the changes and additions coming to the game with this update. 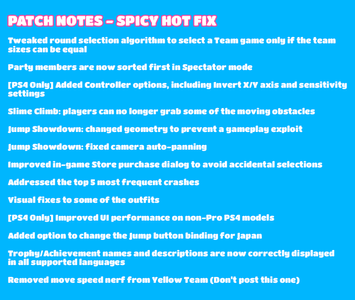 Along with the above picture here are all the patch notes:

Despite, claiming "Party members are now sorted first in Spectator mode" would be fixed, it has not been fixed in this patch and will arrive in a future patch.