Prince of Persia Remake: Release Date, Platforms, Teasers, Trailers And Everything We Know

Time to turn back the sands of time?

Prince of Persia may have been shelved a decade ago as Ubisoft moved away from the series, but it looks as though it's returning as early as this year.

Since 2010, the franchise has remained dormant and with 10 years passing it could be the right time to dive back into the sands of Persia.

Ubisoft Forward looks like the location for its grand unveiling if recent rumours are to be believed.

The platforming franchise looks to be making a comeback as a sort of remake - here's all we know.

Ubisoft has confirmed that due to the ongoing COVID-19 pandemic, the Prince of Persia Sands of Time Remake has been delayed until March 18, 2021.

Due to the COVID-19 situation, Prince of Persia Sands of Time Remake has been postponed to 18th March 2021.
More details from the Dev Team here: pic.twitter.com/vWLavVxNyZ

Not only has the remake been made official, but we got this awesome trailer.

Oh, and the Prince's original voice actor, Yuri Lowenthal, is reprising his role!

VGC has reported that an Amazon listing has appeared for "Prince of Persia Remake" on both Xbox One and PS4, ahead of a likely reveal at Ubisoft Forward tonight.

Not only that, but it looks as though a Resetera user has stumbled upon advertising materials for the game via Ubisoft's own Uplay launcher on PC! Check them out below.

It looks as though Ubisoft has ruined its own surprise, with longtime industry insider @Nibellion also sharing an image of what appears to be a title screen or key art.

Another Prince Of Persia: The Sands Of Time Remake imagehttps://t.co/2yyOREk160 pic.twitter.com/CyqlIh4Znz

Twitter user ZhugeEX posted a short video clip of some sounds that appear to be in the remake!

Jason Schreier, while speaking on the latest Triple Click Podcast, claimed that Ubisoft is planning to use the event [Ubisoft Forward] to “announce a bunch of games like the Prince of Persia remake that was leaked a couple of weeks ago”.

Retailer Max.com.gt recently published a listing for the game on PS4 and Nintendo Switch, before being pulled. 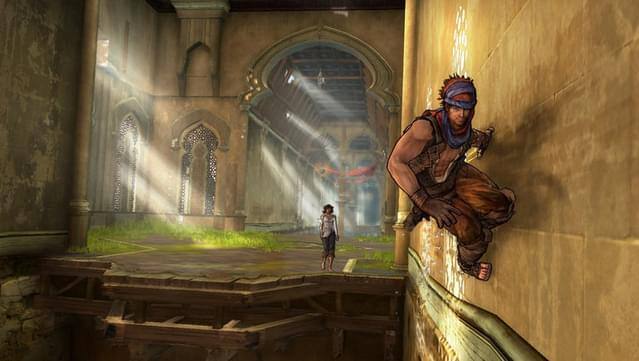 Twitter user @KenXyro spotted the listing, which you can see below:

For now the game is listed for Nintendo Switch and PS4 with an estimate release date of November 2020.

Bloomberg's Jason Schreier then responded to Roberto Serrano, another industry leaker who showed scepticism for the leak, with tacit confirmation that the game is coming.

The latest Ubisoft Forward event revealed the title was scheduled to release on January 21st 2021.

However, after being delayed due to COVID-19, the game will launch on March 18th, 2021 instead.

The leaks have revealed a PS4 and Nintendo Switch version of the game, but we don't know if it's coming to Xbox just yet.

Considering Ubisoft's current relationship with Microsoft for marketing on the likes of Assassin's Creed and Far Cry, we'd be surprised if the remake didn't arrive on PC or Xbox One.