Will your favourite operator change based on the new optics?

We got a glimpse at the new optic options at a preview last week, but Ubisoft has released a new developer blog that runs through more of the changes.

Alongside new accessibility options including different coloured reticules, Siege players will have plenty to learn. Here's all we know so far.

Scopes will now be distributed differently among operators, meaning your favourite picks are likely to begin the new season with new options that'll take time to learn.

"Previously we only had one choice when it came to scopes: either the weapon gets an ACOG or not" the blog explains.

"We will now have 4 scope options with different magnification to distribute to operators and their weapons: A 1.5x, 2.0x, 2.5x and a 3.0x."

Ubisoft is also tweaking which weapon classes have access to certain scopes, so the 3.0x magnification will be available to DMR weapons, while LMGs and Assault Rifles will get 2.5x.

Ubisoft has also confirmed that these distributions are subject to change based on player feedback.

Check out the distribution chart below: 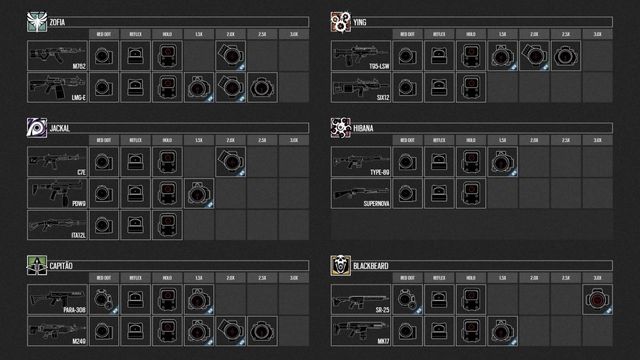 Here's all we know about each scope type:

The 3.0x scope maintains its level on Capitao and Gridlock's LMGs, and is getting a cleaner look for the new season.

It'll also be more available, particularly to players with DMRs.

The ACOG scope is having its magnification lowered to enable players using it to focus on shorter-range kills.

It'll also appear as 2.5x Scope in the game's menu.

A new scope with a 1.0 zoom level, this option is ideal for close-quarters combat and Ubisoft is working to reduce the screen space taken up by the rail it's mounted on.

The new holographic sight remains at 1.0 zoom level, but it has a cleaner look and a more minimal reticule.

Introducing a whole new magnification class to Siege, the 1.5x will offer a close-quarter scope that provides a "comfortable zoom level to fight at the 10M range".

Offering a slimmer frame and less clutter, while also adding a small blind spot in the top left, this will be added to LMGs and Assault Rifles.

Elsewhere, there are ADS sensitivity changes. As per the blog:

"The inconsistent feeling when using different optics was caused by different sources of FOV that affected the player's aim with sights and scopes. We've now made a gameplay change to compensate these FOVs, which will result in a more consistent movement across all FOVs and magnification level of our optics when aiming down sight."