A Year of Fun

Pokemon Masters was released last year and has already become one of the most popular mobile games across the world.

Now, the game is celebrating its first birthday!

They have so much in store for players and we cannot wait to see how you react to all the news!

For the one-year anniversary, they are rolling out some brand new Sync Pairs that are exclusive to the one-year event!

The announced this over on their special site with all the news around the special event, but as of now we only know one Sync Pair going to be apart of the event.

The first pair announced is Sygna Suit Cynthia and Kommo-o, and they had this to say about this pair:

"Sygna Suit Cynthia & Kommo-o: The Dragon-type sync pair of Sygna Suit Cynthia & Kommo-o will make their debut in the sync pair Spotlight Scout, which is available now until September 3 at 06:59AM BST. A Sygna Suit is a special outfit that Trainers can wear into battle on the island of Pasio. This sync pair uses moves like Eyes on the Prize!, which raises a player’s critical-hit rate while also reducing their sync move countdown, and Clanging Scales, which attacks all opponents at once"

A new event was also announced for players, this one is focused around Cyrus and Palkia.

The event itself is called "New World Dilemma", more details about the event are listed below!

"Cyrus & Palkia: The sync pair of Cyrus & Palkia star in an in-game event titled New World Dilemma, which is available now until September 3 at 06:59AM BST for those that have completed Chapter 1 of the Main Story. In this event, players will embark on an adventure with Cyrus, the boss of the villainous Team Galactic, and Sygna Suit Cynthia. Players who complete New World Dilemma will have the sync pair of Cyrus & Palkia join their teams" 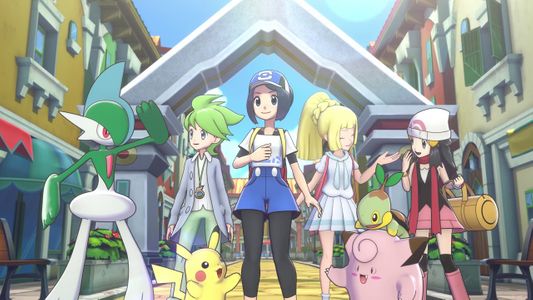 Trainers will also have the opportunity to earn rock-type Pokemon through eggs this event!

"This event lets players earn Pokémon Eggs, which can be hatched into Rock-type Pokémon such as Aeordactyl, Onix, Geodude, and Kabuto. Rare shiny versions of Aerodactyl and Kabuto can also be obtained. All Pokémon hatched from Eggs can be paired with the game’s Main Character to battle alongside one another. This event is available now until August 25 at 06:59AM BST for players who have completed Chapter 1 of the Main Story."

The beloved trainer and Pokemon are making a return to the game and can be found at Spotlight Scout from August 20 at 07:00AM BST until September 3 at 06:59AM BST.

A new era of Pokemon Masters is upon us and it will be releasing to players on August 27th, 2020!

As noted on the anniversary website, this is essentially the proving ground for you and your Pokemon.

You will have the opportunity to battle every Elite 4 and Champion whenever you want!