Could It Be Back?

Once upon a time, the SOCOM franchise was one of the most beloved games of the PS2.

Now, the series was put on a halt with the latest release coming back in 2011.

Now, new leaks have surfaced that may suggest it will be making a comeback soon!

Here's all the news.

Originally reported by Gamerant.com the rumors come from an anonymous 4Chan post which has made fans believe that a reveal is coming soon.

It is tricky to know if this is going to be true or not in the long run, as since it is coming from 4Chan you never know what to believe.

It is important to note that the rumor suggested that the game would be revealed back during the August 6th State of Play. We know that this reveal did not happen, but it could be in play for sometime in the future. 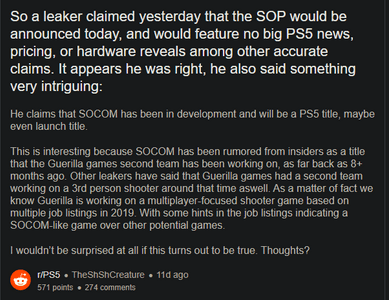 It is still up in the air whether or not this rumor is going to be true.

Believe what you want to at the moment, as Sony has been relatively quiet regarding any leaks around upcoming PS5 games!