The successful esports team joins the all-new racing series, which will compete with a unique format on the most iconic tracks in the world.

The V10 R-League, the first tournament in the Global Racing Series, is quickly stacking up the biggest names in esports.

The latest team to sign on for the inaugural season of the V10 R-League is energy drink and esports giant Red Bull.

They join the likes of Fordzilla, Williams Esports, Racing Point, JEASA Suzuki, and the all-new Yas Heat team in competing for the first championship of the GRS, a brand-new esports series developed by Gfinity and Abu Dhabi Motorsport Management (ADMM).

The drinks manufacturer has quickly become associated with success at every level of both real-world racing and in esports. Red Bull teams throughout the racing world are usually found at the top of the standings, and the V10 R-League should be no different.

With a strong roster of talented sim racers to draw from, they are certainly among the early favourites to take the championship.

Red Bull Racing Esports Senior Manager Luke Jones said: “Red Bull Racing Esports prides itself on being at the forefront of sim racing and taking on new challenges when they arise. By joining the V10-R League, we hope to prove that our team of drivers are highly adaptable, and able to compete in any new and exciting formats presented to them. The competition and powerful new car should make for some gripping on-track battles. We are looking forward to the season getting underway, and with the drivers we have in our squad, we’ll do what we can to fight for the inaugural title.” 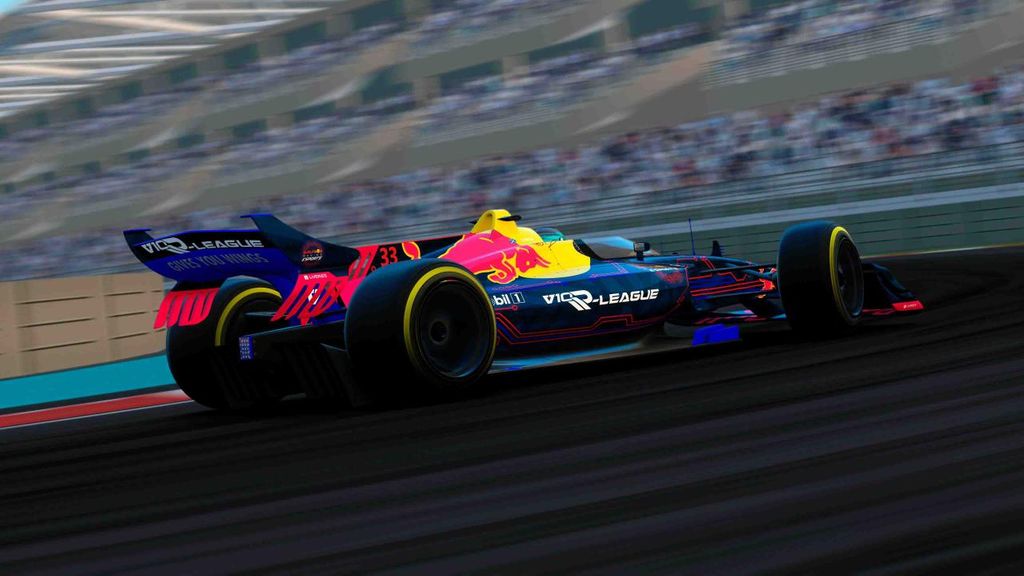 After promising a unique format, the V10 R-League has revealed a truly exciting league format for the races.

The league will be made up of eight teams competing in round-robin format, giving each team seven matches and creating 28 matches for fans to watch during the season.

Each match will be comprised of three rounds, with head-to-head, team-versus-team competition at the fore.

The first round will be driver against driver in a head-to-head race that is best of three. There will be three such races, and the team that wins at least two of the three head-to-heads earns one point.

The starting grid for these head-to-heads will be determined by a 10-minute qualifying session.

Round two is a relay race; each driver must complete two laps, with driver swaps being carried out in the pitlane. The first team to cross the finish line will get one point.

The third and final round is a team race. All six drivers will be on the track to compete. The aggregate final placements are counted to declare a winner of the round. The winner gets one point; however, a draw can occur here.

Drivers will also earn points in the final race that go toward the team tally.

First place gets 10 points, with six points for second, four for third, three for fourth, two for fifth, and finally one point for sixth place.

Nick Westwood, Executive Producer, said, “We wanted to create a format that is as entertaining as possible for the viewer. Each of our races require overtaking and both attack and defence strategy; they are short-form, sprint challenges; and teams will deploy drivers in different ways. For example, one driver can be used to hold position, one to race off and make gains, and one who can attack with aggressive overtakes. Much like Cricket did with T20, we want this championship to inject more drama and fun into racing.”

Paul Kent, Head of Esports: “The virtual world allows you to create formats that you could only dream of in the real world. The team-versus-team element was where that started — the idea that, each week, one iconic racing brand could test their drivers against another’s based on pure driving acumen. From there, the team-based race formats allowed us to develop challenges that redefine the traditional concept of a racing competition. Whereas in real-world racing, where your teammate really becomes your biggest rival, in R-League teams only succeed if they race together as a unit.”

Each match week will take place on a new track, and the V10 R-League will be using some of the most iconic pieces of tarmac in the world.

The amazing Nordschleife will provide the ultimate test to drivers, but they will also be visiting Brands Hatch, Monza, Spa Francorchamps, Laguna Seca, Vallelunga, and Yas Marina.