Previously, we looked at #30-21. We’re nearing the end of our Top 100 Ratings Countdown and predictions, with #20 to 11, and several decent upgrades and position changes to discuss!

With a TOTS to his name, Busquets could well hold his 89 rating, still being easily one of the best CDMs on the ball in the world today.

Despite this, there’s a small chance of a downgrade given that Barca had a below-par season 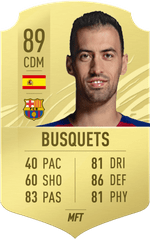 Kroos is expected to become the highest-rated midfielder at Real Madrid with an 89 rating, following an impressive season which saw him have the highest pass percentage in La Liga, as well as 4 goals and 5 assists. 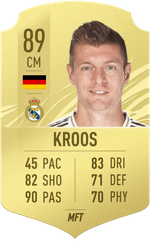 Sergio Ramos shows absolutely no signs of slowing down despite being 34 years of age, with another La Liga title in the bag, and 11 goals to his name in the league.

After a title-winning season in La Liga, keeping 18 clean sheets in the league with only 20 goals conceded, Courtois is definitely in with a shot of getting a boost from 88 to 89 in FUT 21.

Despite not winning a trophy with Chelsea this season, the Frenchman still remains to be one of the best midfielders in world football and should retain his 89 rating heading into the new season.

Before suffering a slight injury setback, Suarez was still on fine goalscoring form, bagging 16 goals in 22 appearances for Barcelona in their La Liga campaign.

A TOTS item, as well as a few other performance-based upgrades in FUT 20, should mean he keeps an 89 in FUT 21.

Surely tipped for the top goalscorer award before injury setbacks, the Argentine bagged nearly a goal a game in the Premier League this season when fit, proving that he’s still right up there amongst the world’s best attackers.

The Belgian had arguably his worst season to date following a big-money move to Real Madrid. Plagued by injuries, he only registered one goal in his first season at the Bernabeu and should receive a downgrade to a 90 OVR.

Following Liverpool’s Premier League title, and a TOTY in FUT 20, Alisson should be set for a 90 overall in FUT 21, making him one of only three GKs hitting the 90+ mark.

The German proved that he’s one of the best goalkeepers in world football, keeping 14 clean sheets for Barcelona this season.

Whether he’ll retain a 90 rating against strong competition is still up for debate, but we can’t see him moving much in ratings next season.