The Creative Director on UFC 4, Brian Hayes, sat down with VG247 and revealed a number of details on the game's career mode.

The release of UFC 4 is on the horizon and with so many new features coming in the latest title, fans can't wait to get into the octagon.

In a recent interview with VG247, Brian Hayes, the Creative Director on UFC 4 revealed some interesting details on the game's career mode.

Here are the key points and details we learned from Brian Hayes' interview:

Hayes revealed the career mode will feel less linear in the way in players will progress their character.

He stated, "The biggest difference between career mode on UFC 4 and previous ones is really the non-linearity, or the unscripted nature of the journey you can have."

Players will have a lot more decisions to make in UFC 4, which will, in turn, have benefits and consequences.

One of these key decisions that players will be responsible for making is whether they take the fights they are offered.

Hayes stated, "So, you can get offered a fight against somebody you think you might not be ready for, choose not to take it... that will have ramifications."

This adds a level of depth and decision making that has not been seen in a previous UFC title.

Relationships With Other Fighters

Hayes noted players can build-up friendships and rivalries with other fighters which come with benefits and consequences.

He stated, "If you’re respectful to them, it might actually form a friendship, and then they might be less expensive to come to your gym and train with you in the future, and learn moves from."

This means you can utilise your friendship with other fighters to develop and evolve your own style.

Players will have the option to release certain information out onto the game's inbuilt social media.

This can be used to generate hype for a future fight or even taunt your opponent.

Hayes revealed an interesting example, stating "If you do [KO] somebody in a training session, then in the future there’s the opportunity to release a clip of that training session on social media to build up hype for an upcoming fight."

It will be interesting to see how social media is built into the game and how much freedom players have on it.

Players will also have the choice to develop relationships with fighters over text messages.

How the player responds to these messages will determine their connection with that fighter.

A positive relationship may bloom into a new training partner.

Either way, the texting and social media features add a level depth we have not seen before in a UFC title. 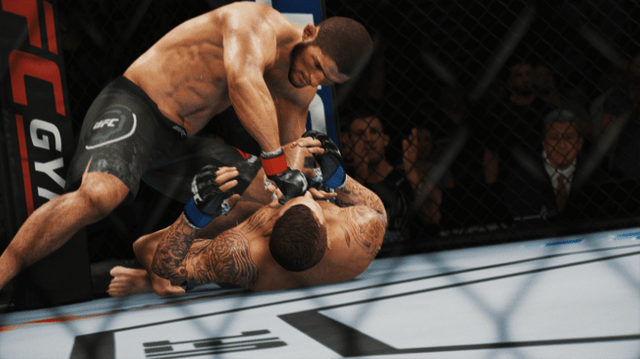 The development of your fighter in career mode will now centre around the fighter evolution system.

Hayes reveals how the system works, stating "You get better at what you’re doing... so, as opposed to there being separate minigames, or HUD-based menu systems where you do that, you use those interfaces to earn a couple of integers to put towards attributes and whatnot, all the training is accomplished either in fights, or in sparring sessions."

This is another feature that adds another level of immersion into the game.

The player is developing their fighters moves whilst using them in sparring sessions and fights.

In performing these moves, players will earn evolution points that can be spent on levelling up these moves.

Players will be able to create their own custom movesets and combos in career mode.

A player's fighter will learn each individual moves from training camps with different fighters of their choice.

Hayes explains how it works, stating "Basically, through the ‘Invite a Fighter’ system, that’s how you determine, okay, what moves do I want to add to my arsenal? If I see that I can invite Anthony Pettis to my gym, and he’ll teach me this move."

This is an interesting and exciting mechanic as players can customise their fighters arsenal through learning from their favourite fighters.

However, Hayes reveals there are limitations at the beginning as "when you’re just a UFC rookie, let’s say, the champions might not necessarily be dying to come to your training camp to teach you stuff."

You can check out the full interview here.