Next up in our Team Predictions, we have the Champions of England, Liverpool, with a team that looks set to get upgraded across the pitch!

With more news on FIFA 21 getting closer and closer as the weeks go by, it’s time to start looking at some potential team and player ratings for some teams that may feature on the FIFA 21 Demo!

With the following teams all rumoured to be included in the demo release around September 21st, plenty of speculation is starting regarding player ratings for the new year of FIFA.

Carrying on our FIFA 21 Team Predictions, we have the Champions of the Premier League, Liverpool, and a team full of upgrades following their incredible league campaign!

After Liverpool’s dominance in the Premier League this season, it’s safe to assume that a large number of the team will be getting some juicy upgrades heading into the new season! 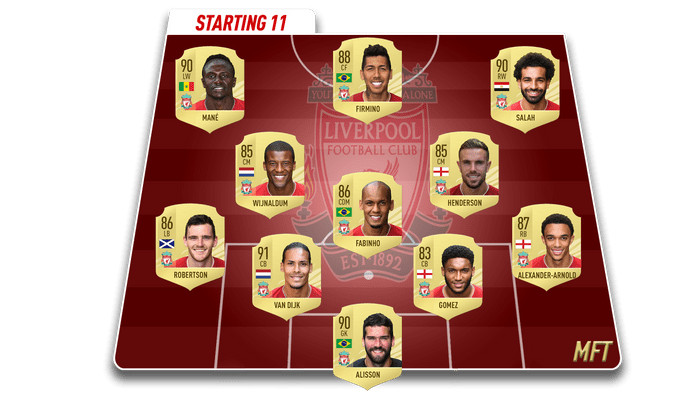 In goal, Alisson looks set to get a boost to a 90 overall, following a TOTY and TOTS card during FIFA 20. While it’s unlikely he’ll be the highest rated GK in FUT 21, with strong competition from Oblak, he’s definitely going to be one of the best, and certainly the best goalkeeper in the Premier League.

While Trent is still only 21, there’s no doubt that he’s potentially the best right-sided full-back in the world at the current time. We certainly wouldn’t rule out an 87 overall rating going into FUT 21, and potentially another TOTY card.

The youngster has certainly solidified his place in the first team this season, with 2000 minutes in the Premier League, earning a Community voted TOTS card. A +3 upgrade looks to be fair and could be a fantastic starter team going into FUT 21.

Easily the best centre half in the world at the moment, Virgil Van Dijk could be getting another upgrade heading into FUT 21, taking him to a 91 rating. Another TOTY is certainly awaiting the Dutchman in the new year, and will be the best starting CB money can buy in FUT 21.

The Scot has staked his claim to being the best left-back in the world currently this year, following his inclusion in the TOTY squad. A +1 upgrade seems to be fair, taking him up to an 86 overall for FUT 21.

A number of FIFA ratings outlets, including SoFifa, have Fabinho set as an 86 rating going into FIFA 21, despite not receiving too many performance-based upgrades this year in FUT.

The Liverpool captain will no doubt be receiving a solid +2 boost in FUT 21 after guiding his team to the historic Premier League win. With a TOTS card to his name, an 85 overall seems very likely for Hendo.

While Gini didn’t get on the scoresheet much from his central midfield role this season, there’s no doubting his importance to that Liverpool system, and he should be rewarded with a small +1 boost.

The Egyptian has once again been Liverpool’s top goalscorer this season, bagging 19 goals and 10 assists from his right-wing position. While this is impressive, as a 90 OVR already, we anticipate that Salah will retain his rating rather than see any changes.

Mane has really pushed on yet again this season for Liverpool, earning a spot in the TOTY squad, contributing 25 goal contributions towards Liverpool’s title-winning campaign. Many will argue he and Salah are on the same level, and both deserve 90 rated cards in FUT 21.

While Bobby Firmino may only have scored 9 goals from his advanced role, along with 8 assists, his importance to the Liverpool attack cannot be understated, with plenty of pass-to-assists and brilliant linkup play. A +2 OVR to highlight him as one of the Premier League’s best-attacking players seems very likely.

Liverpool have plenty of strength in their younger talents coming through the ranks at Anfield, however, in terms of strength in depth for the first team, questions could be asked. It’ll be interesting to see what boosts we’ll see to some of the breakthrough stars such as Curtis Jones, as well as players like Naby Keita in FUT 21.