Modern Warfare Season 5 To Be The Last Season? No Season 6 - News, Rumors and More!

This Is The End!

Modern Warfare Season 5 will be kicking off in just a few days, after official confirmation via a promotional email from Activision themselves.

Now, rumors have surfaced that this could very well be the last season of Modern Warfare.

Here are all the leaks!

Tweets from users TheMW2Ghost and ModernWarzone have received the same leaks from a well known Korean-Canadain YouTuber/COD Partner by the name of DougDagnabbiit.

This information notes that Season 5 of Modern Warfare will officially be the last season for this year, and we are not going to get a Season 6 anytime after.

"I heard from staff (IW staff or Blizzard Entertainment Korea staff) that there's no season 6 - after season5, they prepare to a new call of duty game" 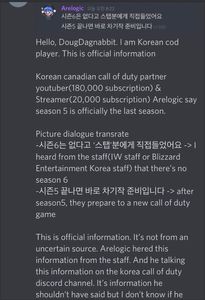 It is hard to say the legitimacy of this leak, as the person who has leaked this is a pretty high profile person within the COD community. Bolstering over 170,000 subscribers on YouTube.

However, we do not have any official news from Activision themselves yet; but it would make sense for Season 5 to be the last season.

If it lasts longer than a month and a half, it would not leave much time for the next season of Modern Warfare before the release of the new Call of Duty!