Our Top 100 Countdown heats up as we enter the final 30 players!

Previously, we looked at #40-31. We continue on our Top 100 Ratings Countdown and predictions, with #30 to 21, and several decent upgrades and position changes to discuss!

The Dortmund man definitely deserves a small boost in FUT 21, following a strong Bundesliga season in which Dortmund consolidated a 2nd place finish and in which Hummels earned a TOTS item. 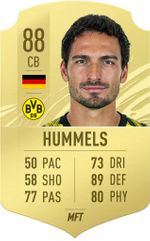 The Croatian has faced heavy pressure from Federico Valverde for a starting CM spot this season and hasn’t justified his 90 rating.

Expect him to still be a top card in FUT, but to drop a couple of ratings to an 88.

Casemiro has arguably been Real Madrid’s finest player this season. An absolute rock in the centre of their midfield three, with the most tackles and interceptions across the entire league.

A +1 would seem pretty much guaranteed for the Brazilian.

17 clean sheets for Ederson this season, despite Man City having a somewhat weaker than average defence means he should retain an 88 rating next year in FUT21.

The Korean maestro has had another very successful season in North London, with 22 goal contributions in the Premier League in his wider LM role.

A +1 upgrade seems very likely and is definitely one to get your hands on FUT 21.

Aubameyang could potentially get a boost up to an 89 rated ST in FIFA 21 following a 22 goal season in the Premier League, establishing himself as one of the best strikers in Europe.

Manchester City’s leading scorer for the season with 20 goals coming from the left-wing, Raheem Sterling easily deserves yet another boost going into FUT 21.

A +1 upgrade and a switch to LW seems very likely.

While some may feel Griezmann didn’t deliver following a monumental £100m+ move from Atletico Madrid, 13 goal contributions in a competitive Barcelona front line and a TOTS item may help him retain that 89 rated card heading into FUT 21.

Despite a couple of injuries throughout the season, Kane has still proven he’s right at the top of the list of world-class strikers, grabbing 18 goals in 29 appearances for Spurs in the Premier League. He’ll keep his 89 rating going into FUT 21, with some small stats changes.

Manuel Neuer appeared to have a far greater season than last, keeping 15 clean sheets for Bayern as they dominated the Bundesliga.

Narrowly missing out on a TOTS card, Neuer looks like he’s refound his world-class form, and should get a +1 to reflect that.