Our FIFA 21 Top 100 Ratings Countdown continues with #40 to 31! Click to see who's getting upgraded and downgraded in FUT 21!

Last time out, we looked at who landed in #60-41. We continue on our Top 100 Ratings Countdown and predictions, with #40 to 31, and several decent upgrades to discuss!

Even at the age of 36, Handanovic shows no signs of letting up, keeping 12 clean sheets in Serie A for Inter, earning himself a TOTSSF item in the process. We expect him to keep his 88 rating with some minor stat changes. 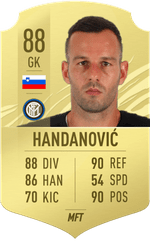 Before the restart of the season, we’d have tipped Pogba for a downgrade, however since coming back from injury, Pogba has started to look like the world-beater we know he can be for Manchester United, and based off that form, should retain an 88 rating.

While not being Juve’s top goalscoring threat, in Serie A the Argentine still contributed 22 goals and assists in total.

While he might not be set for an upgrade in rating, we expect some nice boosts to his stats and a position change to a more advanced CF role.

It’s fair to say the Lazio hitman has had an incredible season in Serie A, scoring 35 goals in 36 appearances, earning a whopping 6 IFs throughout the course of FUT 20.

His goalscoring form should easily earn him a +2 upgrade heading into FUT 21.

A key part of that deadly Liverpool trio up top, Bobby Firmino definitely deserves some recognition for his important role in the title-winning season and should receive a +2 boost.

Bernardo Silva has certainly shown his class yet again this season for Manchester City on the right-hand side, contributing 13 goals/assists in the league this season.

While Barcelona may have had a turbulent season in the league, falling short to Real Madrid, Pique has still had a decent season and should retain his 88 rated card from FUT 20. 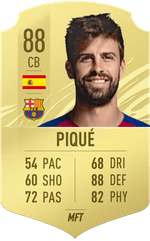 A couple of injuries for Koulibaly this season along with Napoli’s disappointing league finish outside the top 6 certainly shows grounds for a downgrade to the Senegalese, an 88 rating seems fair.

The 32-year-old Frenchman has had one of his most productive seasons yet, with 29 goal contributions to his name in La Liga.

This should secure at least an 88 rated card for FIFA 21 and bring him up closer to the likes of Griezmann and Suarez.

Thiago is enjoying his prime years currently, and in Bayern’s midfield with Kimmich beside him, he’s had another solid season as a deep-lying playmaker.

A TOTS card, along with interest from Liverpool should boost the Spaniard up to an 88 overall.