Here's all we know about Hawkeye!

Here's everything we know about Hawkeye in Marvel's Avengers!

Hawkeye is coming to Marvel's Avengers, he has his own unique missions too.

There seem to be three others planning to be added alongside Hawkeye.

This was announced during the second Marvel's Avengers War Table stream.

The missions mentioned before will be not only solo gameplay but co-op too.

Many fans were upset when they believe Hawkeye hadn't been included in the Avengers once again but your prayers have been answered!

It looks like he is wearing hearing aids in the trailer, meaning he could be partially deaf like in the comics.

This version of Hawkeye seems to be based around the Hawkeye #1 variant edition, see below. 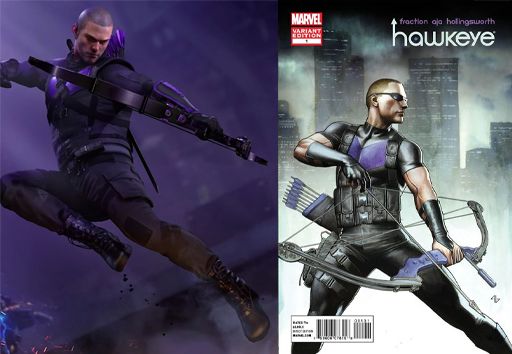 Near the end of the trailer you can hear faint barking, could this be Lucky the Pizza Dog?!

Crystal Dynamics explained the story will be around Kamala Khan (Ms. Marvel) and her recruiting Avengers.

They then showed logo's of character that will be playable, these included, Captain America, Ms. Marvel, Hulk, Iron Man, Black Widow and Thor.

There are still currently three question marks in terms of who the other characters are.

Hawkeye carries a bow and quiver, the bow is collapsible and his quiver is more advanced than that of a normal one.

It also seems he has a katana on his back in the trailer (timestamp 0:32)!

Due to his lack of powers, he makes up for it with a massive range of arrow types, these are:

We expect to at least see some of these in-game, if not all!

We don't expect Hawkeye to have any special 'powers' as such but he is basically superhuman.

He had been trained as a child in the circus by criminals and is advanced in fencing, acrobatics, martial arts and marksmanship.