Warzone Season 5 Trailer: 5 Details You May Have Missed In The Shadow Company Trailer

Change is coming to Verdansk...

After three teasers surrounding the release of Season 5 for Modern Warfare and Warzone, the first full-length trailer for the new season of content has been revealed by Activision.

The trailer introduces players to the Shadow Company, who were teased a few weeks ago, is a new faction complete with three brand-new Operators arriving in Season 5.

Throughout the trailer, there are various teasers which you may have missed.

Here are five crucial teasers that you have may have missed when watching the trailer.

If you missed the Shadow Company trailer, you'll want to watch it before reading on!

As Shadow Company storms through a multi-storey car park in Verdansk, two brand-new weapons can be spotted.

The first weapon appears to be the APC9 sub-machine gun, a weapon that bears similarities to the UMP45 and a weapon that has allegedly been inside the game files since November last year.

The second weapon can be seen in the hands of the Operator in the background of the screenshot. At first glance, it appears to be the return of a Black Ops classic - the AN94. It is likely that the name has changed but could this be the beginning of teasers dropping for Call of Duty 2020?! 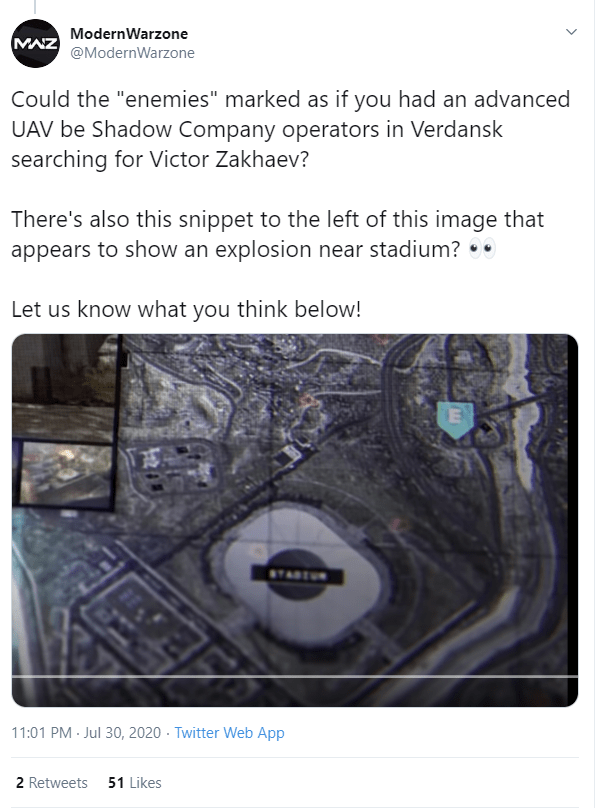 The Verdansk stadium has been a hot topic of conversation in recent months, with many players believing that it will be opening up to reveal something that ties in with the bunkers which can be found around the map.

Initial teasers suggested an explosion will take place somewhere in Verdansk and @ModernWarzone has spotted a frame in the trailer which suggests the explosion is going to take place in close proximity to the stadium.

Is it going to be destroyed before we ever find out what could be contained inside?!

A streamer recently encountered a glitch that he claims to have put him into the Season 5 map and shows what it may look like. 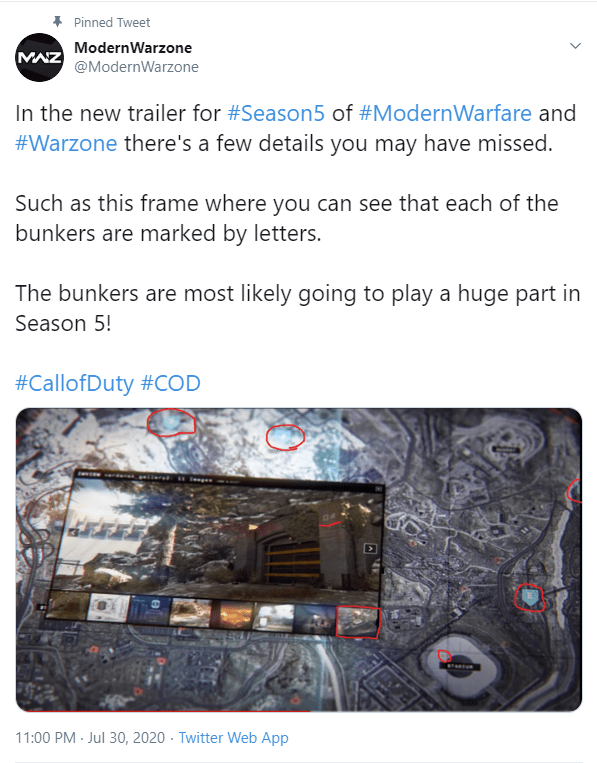 The trailer indicates that the bunkers are going to play a pivotal role in the upcoming season of content, whether that is to reveal the new title or to continue the ongoing storyline between the Coalition and the Alliance.

@ModernWarzone may have uncovered the meaning behind the letters on the entrances to the bunkers. The trailer clearly shows the bunkers marked in blue heavily implying that we could see the nuclear weapon in action.

During the trailer, an insert showing the contents of the bunkers appears and along the bottom, a frame displaying a blazing inferno can be seen, suggesting that widespread destruction is heading to Verdansk at some point in the not too distant future…

Is Season 5 going to be the first time Warzone undergoes some form of change since its release? Is it eventually going to lead to the release of a brand-new map? We will get the answers on August 5th!

The voice in the trailer that introduces Shadow Company sounds very similar to General Shepherd. It begs the question as to whether he is playing a part within the game and Shadow Company.

It's hard to pinpoint since Ortega is known to be the leader of Shadow Company.