Last time our we looked at #80-61. We continue our Top 100 Ratings Countdown and predictions with #60 to 41 on our list, featuring a number of big upgrades from last year!

Continuing on our top 100 countdown, we have the Brazilian Marquinhos, who enjoyed another solid season at PSG, winning the Ligue 1 title and earning himself a TOTSSF card in the process. 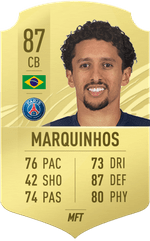 The Polish GK has had a sterling season between the sticks for Juventus, earning the number one jersey and leading Juventus to yet another Serie A title.

A TOTS card, along with his impressive league campaign should secure him a boost for FIFA 21.

From one GK to another, Keylor Navas should retain his 87 rating at least in FIFA 21, with potential for a boost to an 89, after winning Ligue 1 with PSG and a number of performance-based upgrades over the season.

The PSG love continues with the other half of the CB pairing, Thiago Silva.

Despite being well into his 30s, he’s proven yet again that he’s one of the best CBs on the planet and will either retain his 87 or get a small boost to an 88.

The Argentinian has enjoyed a highly productive season in the French capital yet again, with a host of goals and assists, earning him a TOTS item. We expect a well-earned boost to an 87 in FUT 21.

Mertens should be holding his 87 rating this year after an okay season for Napoli, which saw him earn a host of cards, including an upgraded Headliners card.

A slight injury may have set him back a little bit, so there is a small chance of a downgrade.

According to Transfermarkt, Hugo Lloris’ market value has almost halved in the last 12 months, after only keeping 6 clean sheets in the Premier League this season.

A lengthy elbow injury should also result in a small downgrade for the Frenchman.

After a big-money move to Inter in the January transfer window, Christian Eriksen hasn’t lived up to expectation in Serie A, with only 1 goal and 2 assists to his name in 16 appearances.

This poor return should see him receive a -1 rating in FUT 21.

After earning a TOTY item, Frenkie De Jong has solidified himself as one of the top midfielders in the world and should be set for a +2 rating to take him up to an 87.

Ziyech will definitely get a boost going into FIFA 21, following a big move to Chelsea after an impressive season at Ajax.

Following a move away from Old Trafford, the Belgian has re-found his clinical goal scoring form, scoring 23 goals for Inter in their Serie A campaign this season.

His impressive return should be rewarded with an 87 rating come FIFA 21.

Another one of Chelsea’s marquee signings, Timo’s 36 goal contributions in the Bundesliga for Leipzig have solidified him as one of Europe’s top attackers.

After moving into a more central defensive midfield role, alongside Thiago in the Bayern midfield, Joshua Kimmich has flourished; adding goals and assists to his repertoire.

An 87 rated CDM card will be a top card to use in the early stages of FUT.

An astonishing 21 assists for Thomas Muller in the Bundesliga last season will no doubt see him get a boost to an 87, once again, from his 86 rating in FUT 20.

The little Italian was one of PSG’s key men in the midfield last season, locking down the midfield with his incredible pass percentage, earning a TOTS in the process and an expected +1 upgrade for FUT 21.

Varane has gone from strength to strength in a CB pairing with Sergio Ramos for Real Madrid. 2 In-Forms, a Headliner and a TOTS card definitely reinforce our prediction for a +2 boost to an 87 next year.

The 35-year-old only made 4 appearances for Juventus in the Serie A campaign, following a lengthy cruciate ligament injury and fitness problems.

There’s no doubting his quality still as a defender, however, he will drop down a couple of ratings next year.

Once again, Diego Godin has had a good season, earning himself a TOTS item. However, pressure from De Vrij, Skriniar and Bastoni for starting CB spots and potentially being past his best at 34 may provide a reason for a -1 downgrade.

David De Gea has been having a turbulent time at Manchester United of late, with a string of goalkeeping errors making the headlines in recent months.

There’s no doubt that a downgrade is deserved, to an 87, following his drop in confidence with his #1 spot under threat.

Despite only appearing for Dortmund 19 times in their league campaign, Reus scored 11 and assisted 6 from his deeper attacking midfield role.

He earned multiple performance-based upgrades and a TOTS card, meaning he should retain his 88 rating.