Battles all around, then.

PlayStation Plus subscribers can play Call of Duty: Modern Warfare 2 Remastered and Fall Guys as the subscription services' free games for August.

Announced via the PlayStation blog, each title offers plenty of mayhem. Let's look at what we have. 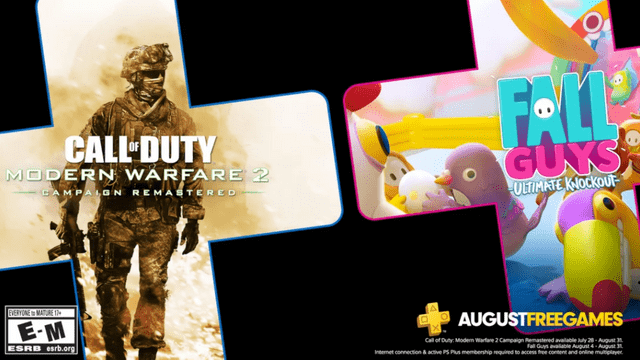 If you're reading this and somehow still don't know what Call of Duty is all about, we reckon you might be in the wrong place. Activision's world-conquering FPS may have risen to prominence with the arrival of the first Modern Warfare, but many fans jumped into the second and fell in love with its fast-paced multiplayer and ridiculously over the top campaign.

While the game's multiplayer isn't included, you can still relive the epic campaign.

Following immediately on from the dramatic events of Call of Duty 4: Modern Warfare, Call of Duty Modern Warfare 2 Campaign Remastered immerses you in a gripping, action-driven adventure in which you must face off against a deadly new threat hellbent on bringing the world to the brink of collapse. The single-player campaign has been fully remastered with improved textures, animations, physically based rendering, high-dynamic range lighting and much more. Rediscover classic missions like Cliffhanger, The Gulag and Whiskey Hotel as you once again join Soap, Price, Ghost and the rest of Task Force 141 in a globe-spanning fight to restore order to the world. Underwater Demo Team Classic Ghost Bundle not included.

Oh, and you can jump straight into the game tomorrow, July 28!

Fall Guys, on the other hand, is a more recent phenomenon that I've seen dozens of tweets about in the last week. A sixty-player party game compendium, there's an element of madcap, Mario Party-inspired shenanigans.

Here's what the PlayStation Blog has to say about it:

Survive a series of hilarious challenges until one victor remains in this colorful 60-person online multiplayer party game*! Test your mettle in brutal free-for-alls or co-op challenges where only the winning team advances to the next round. Bend, bounce and bash your way through hilarious physics-based obstacles, from smashing through doors, to balancing on massive see-saws, to racing up mountains riddled with traps. Add a touch of style to your Fall Guy by customizing them with everything from classy pineapple couture to flattering prehistoric fashion.

The game will be available to download from August 4.

Which game will you be jumping into first?