Infinity Ward is hitting players with the ban hammer.

Modern Warfare and Warzone is one of the biggest games in the world and so its only natural that there are a fair few cheaters in the community trying to spoil it for everyone else.

Well, developers of the game, Infinity Ward seem to have had enough and are putting their foot down. The developer's official Twitter account acknowledged the issue, something fans have been calling on them to do for months.

Attention all cheaters, it might be time to rethink your antics! Infinity Ward announced they will be taking action against cheaters in the form of bans.

The announcement comes from the official Infinity Ward Twitter account, they posted the image below stating those using cheating software allowing hacks and more will become part of a ban wave. 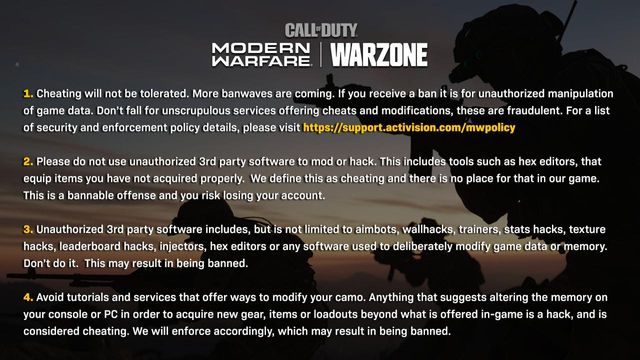 Earlier this year, Infinity Ward had banned over 50,000 cheaters in April which rose to 70,000+ in later months, and we expect this number will go even higher as the developer promises "more banwaves are coming".

Warzone has had a problem with cheaters almost ever since launch, with fans sniping players through walls thanks to software and hardware mods. A recent study showed that at least one hacker is in every in-game lobby, while some of the game's most famous content creators have been calling for Infinity Ward to take action.

Unfortunately, Infinity Ward likely can't do a great deal about hardware hacks like the ones mentioned here, but we hope they can work towards some kind of solution.