Warzone: Infinity Ward Cracking Down On Cheaters - But Will It Work?

Will they finally solve this issue?

Although Warzone has been one of the biggest battle royale releases in quite some time; there has been a constant issue plaguing the game.

That of course has been the number of cheaters, hackers, aim brothers, or however you frame it.

There is an abundance of them in virtually every Warzone match, but Infinity Ward have made another statement regarding hackers, but will it work?

A Twitter image posted by the official Infinity Ward account has made several points regarding cheaters in Warzone and Modern Warfare.

Some of the more vital ones include that there are more ban waves incoming to the game, so perhaps this will solve some of the cheating issues in the game.

The remaining three points seem to be more of an education lesson regarding the dos and don'ts of installing third-party software. 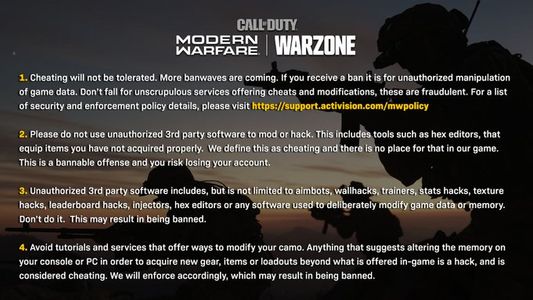 Since Warzone released back in March, there seems to be a constant issue with cheaters in the game. At first, it was horrific; there seemed to be multiple cheaters in every match, but they cracked down on a lot of those cases.

Now, it appears a lot of the same is starting to pile up again and Infinity Ward has been slow to take action.

With the confirmation of more bans incoming, it is unknown whether or not this is actually gonna solve the cheating issue within Warzone; we suspect it will not, as we have seen Infinity Ward try and take action before and it still proved to be an issue.

Looking at other battle royales such as Fortnite, Epic Games purchased TWO anti-cheat companies to work and maintain their program within the game. This has proved to be an exceptional return for Epic, as Fortnite is considered to have one of the best anti-cheats in the world.

This is the route that Infinity Ward needs to take with Warzone; if the cheaters continue to pile up you are going to see more and more players get fed up with the game and it can damage the game long term.