Valorant looks to have been a huge success for Riot Games, in no doubt helped by the developer's nifty Vanguard anti-cheat system which aims to maintain competitiveness throughout.

That doesn't mean people aren't playing a pretty cruel prank on opposition teams, intimating that there is a hacker within their lobby. Here's what to look out for.

Players have essentially been trolling the opposition using in-game chat, sending messages such as the following (courtesy of oh_mans on the Valorant subreddit):

"Due to recent reports, Riot staff have taken action against a player in your current game. Due to Riot Vanguard policies this match will not be counted towards your current rank. Please continue to play normal for the rest of the match."

Now, our first clue would've been that final line (and the grammatical error), but oh_mans and his team understandably noped out of engaging with a hacker. Unfortunately, it wasn't an official message from Riot, so they forfeit the game to a very cheeky opponent.

In case you're wondering, Vanguard has no qualms about cutting a game short. In fact, if a hacker truly has been detected, you'll see the following screen. 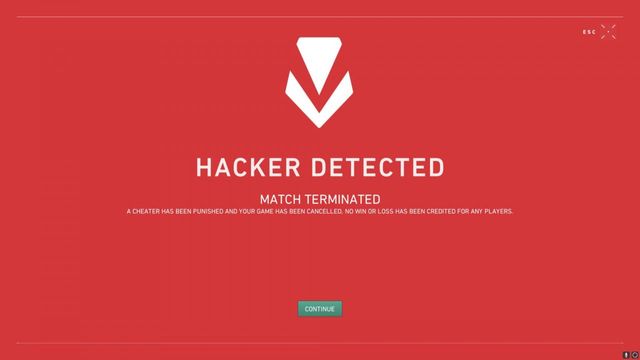 In case you're wondering the message's sender was obscured by a bunch of empty lines of chat, but stay vigilant out there!