Having issues climbing the ranks in Valorant competitive? You aren't the only one!

Valorant is still one of the most popular games right now.

Although there have been a fair few bugs and glitches recently, one of which is an integral part of the game for many players.

Some people have been experiencing issues with the ranked system, here's everything we know.

A Valorant player, TheGaijin1987 took to Reddit complaining about the ranked system.

They provided a screenshot of their match history which showed despite constant wins the character Sova would not increase their rank.

Many others have mentioned they are having the same issue.

The image shows multiple victories which show an up arrow meaning their rank should be increasing but they're stuck at Platinum One.

Others shared screenshots of the same situation, many with barely any losses they still can't rank up. 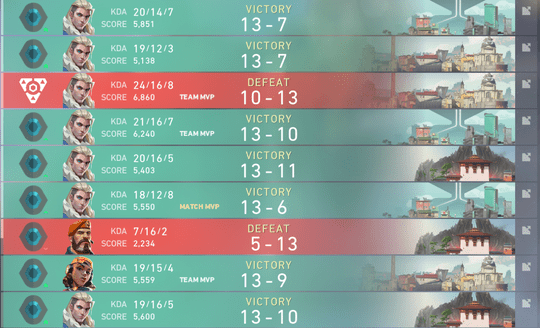 Some suggested reasons for this such as what Redditor Towbeh had to say:

“Honestly, every promotion I’ve gotten bar one has been on a 13-4 or lower, and it barely mattered the previous games behind it, as long as I wasn’t stomped recently that is, as annoying as this’ll sound, I imagine if you get a game where you smash the other team with a good scoreline, you’ll rank up incredibly fast.”

Riot has stated that your individual performance and how much you win by is the key part of how quickly you can rank up, but some players really aren't seeing much going on with their placement.

The person who had created the ranked system has left the company and so there are no real answer for players as of now.

Riot claim they are working to fix this quickly but will also be working on a more long term fix.