Why does it always rain on me?

Paper Mario: The Origami King switches up the combat system when it comes to bosses.

As you explore the Mushroom Kingdom, you'll need to defeat Vellumental bosses in order to progress through the story and free Peach's castle from King Olly's streamers.

The Water Vellumental can be a tricky test if you're not prepared for its attacks.

Here's how to beat it easily.

How To Beat The Water Vellumental Boss In Paper Mario: The Origami King

The Water Vellumental boss works slightly differently to previous ones and has a few tricks up its sleeve to boot.

Where the Colored Pencil boss used pencil missiles to attack panels, the Water Vellumental will use Water Spouts to wash away lines and remove anything on those panels. They will not do so until you've locked in your ring moves. 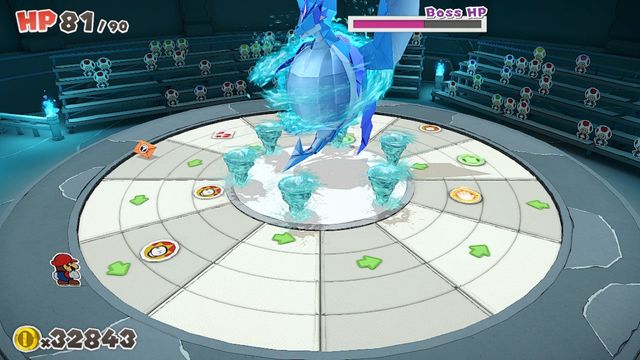 You need to land on an attack icon as Mario's final spot in order to attack, otherwise, you will not be able to.

When rotating the rings, the arrows will need to be placed in a line in order to get Mario to move around the next ring. Otherwise, Mario will run all the way to the end of the line and come to a halt if he is not given a direction to move.

Unlike the Colored Pencils boss, it doesn't matter where your final attack position lands. However, we recommend trying to rotate the panels so that you pick up an extra action command.

Focus on the outer ring and the very central ring to get into position. In the first few rounds, most of the work will be done for you and won't require much organisation. 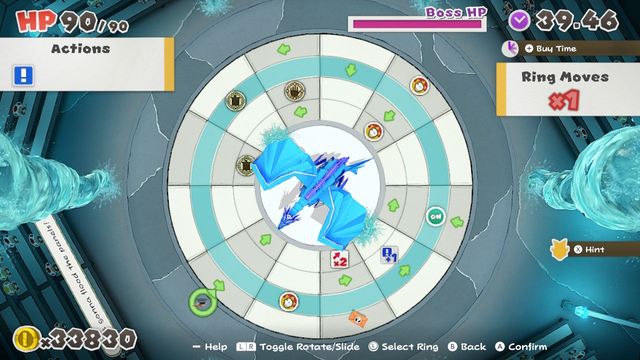 If you manage to line up an extra action command along your path, you can attack twice. You need to attack with your boots while it is in the air, this will bring it down to the floor. Then you should attack it with the hammer.

If you've saved your Shiny Boots and Hammer, you should use it now. If you have none to spare, you can call on the Toad cheer who may throw you either.

Don't panic if you can't get two attacks off, once you've brought the Water Vellumental to the ground, it will stay there until your next attack. 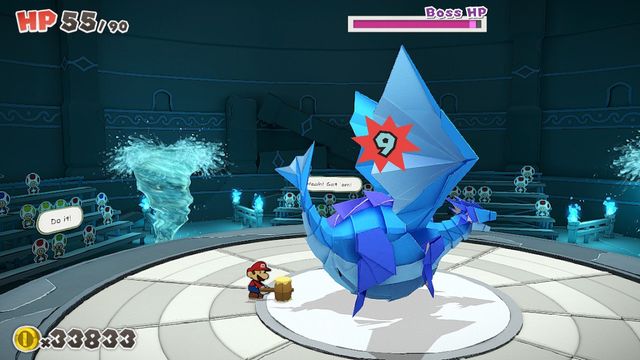 As the battle progresses, you'll find that it starts to consume water and get larger. Every four attacks, after it's gathered enough water, it will use Giga Wave. Which sends a huge tidal wave around the battlefield. You'll know when its ready as a stream of water will surround its large belly.

Where most of its standard attacks do 7-15 damage, you NEED to avoid this one as it does HUGE damage. Be sure to hit the 'ON' button, in order to activate the magic circles in the field.

On your move, before it unleashes its attack, you will need to land on an Earth Vellumental circle, allowing Olivia to raise the platform you're on; meaning you won't take damage. 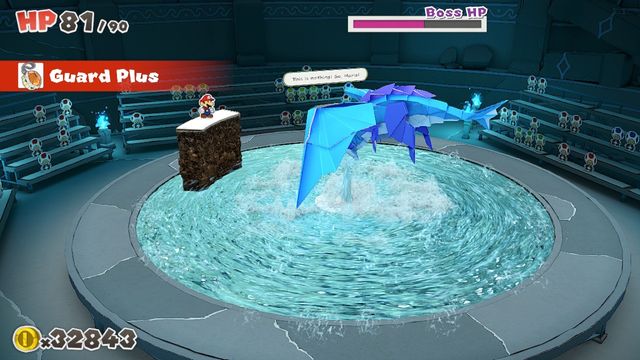 The 'ON' button can often be located in the centre towards the later stage of the game, so you will need to move the panels in a line, rather than rotating them around the ring in order to land on it.

After this attack, the Water Vellumental will be unable to attack for one turn. You can opt to use simple attacks or try to go for massive damage using the Earth Vellumental power again as it will be bound to the floor.

Keep repeating these steps as you go and use the Toads when possible for health, power-ups and a path guide to help you in the trickier situations.