It's time to kick start our FIFA 21 Ratings Predictions ahead of the FIFA 21 Demo! Starting off we have the new La Liga Champions, Real Madrid!

With more news on FIFA 21 getting closer and closer as the weeks go by, it’s time to start looking at some potential team and player ratings for some teams that may feature on the FIFA 21 Demo!

With the following teams, all rumoured to be included in the demo release around September 21st, plenty of speculation is starting regarding player ratings for the new year of FIFA.

So to kick start our FIFA 21 Player Ratings Predictions, we have none other than the newly crowned La Liga Champions for 2019/20, with Real Madrid!

It’s also been confirmed that EA Sports will be the Official Video Gaming Partner of Real Madrid until 2025, so it’s highly likely that we’ll be seeing the La Liga Champions included in the FIFA 21 Demo!

With Real Madrid winning the La Liga title this year, it’s hard to expect any major downgrades across the starting 11, however some players such as Hazard, Modric and Marcelo may see small downgrades with the wealth of younger talent starting to come through the ranks at the Bernabeu. 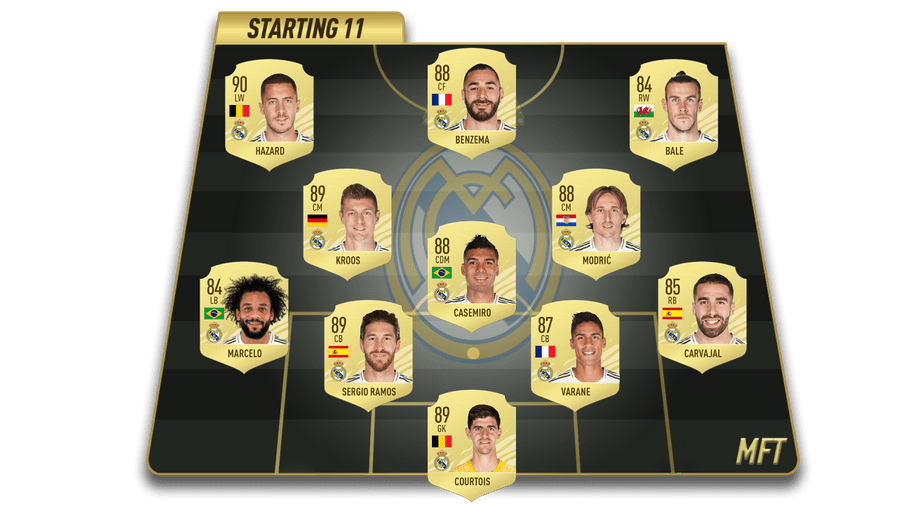 Starting off in goal, we have Thibaut Courtois, who should be seeing a boost in his stats, and potentially a boost in his rating following a solid, TOTS winning season.

With 18 clean sheets in La Liga as well, it’s hard to ignore Courtois for an upgrade heading into FIFA 21.

Carvajal has had another impressive season at the Bernabeu, with an impressive 5 assists to his name from his full-back position.

While his successful season, multiple in-forms and TOTS card will get him an upgrade to his statistics, it’s hard to boost him up to the 86 mark to compete with the likes of Trent Alexander Arnold and Andrew Robertson.

What a season Varane has had in that Real Madrid defence. Not only has he been a rock on FUT, but he’s had perhaps one of his best seasons yet, earning himself multiple in-forms, a Headliner and a TOTS card in the process.

A +2 really wouldn’t be out of the question for the Frenchman, making him one of the most in-demand CBs heading into FUT 21.

Even at the veteran age of 34, Sergio Ramos has shown absolutely no signs of slowing down this season, playing the most games out of the entire Madrid defence this season, scoring 10 goals in the process.

A 90 rated card wouldn’t be out of the question, however, with EA tending to be more critical as players move into their 30s, an 89 rating seems more realistic.

While Marcelo is still a top full back on the world stage, he hasn’t had the best season by his standards and should be set for another downgrade this year.

With only 15 games to his name and strong competition from Ferland Mendy for that starting LB spot, an 84 rating seems fair for the Brazilian, who’s slowly creeping towards becoming mere SBC fodder in FUT.

Casemiro has arguably been Real Madrid’s finest player this season. An absolute rock in the centre of their midfield three, with the most tackles and interceptions across the entire league.

A +1 would seem pretty much guaranteed for the Brazilian, and we wouldn’t even rule out a +2 boost to take him up to an 89 overall!

It’s no secret that Luka Modric has been a little off the pace this season for Madrid, playing the fewest games out of the coveted midfield three of him, Kroos and Casemiro.

The Croatian has faced heavy pressure from Federico Valverde for a starting CM spot this season and hasn’t justified his 90 rating. Expect him to still be a top card in FUT, but to drop a couple of ratings to an 88.

Toni Kroos has excelled yet again this season, putting in some very impressive performances in midfield, earning himself a TOTS card for his hard work.

An upgrade certainly isn’t out of the question for Kroos, who could see a boost to an 89 to exceed his teammates’ ratings.

While there is no doubt surrounding Gareth Bale’s talents, he’s had a very turbulent last couple of seasons at Madrid, after falling out with manager Zinedine Zidane over playing time and having transfers blocked at the final stage.

Having only started 12 games this season in La Liga, scoring and assisting only 4 goals in total, the Welshman has certainly stagnated from reduced playing time and should see a dip in his rating come FIFA 21.

After the biggest transfer of last year, Eden Hazard had a huge weight on his shoulders coming to Real Madrid.

However, a season stricken with injuries which saw him miss 26 games for Madrid and only net once for them in the league makes it hard for Hazard to keep his 91 rating. While it’s highly likely that he won’t get a massive downgrade, he will likely drop to a 90 for FIFA 21.

The 32-year-old Frenchman has had one of his most productive seasons yet, with 29 goal contributions to his name in La Liga, and should secure at least an 88 rated card for FIFA 21, to bring him up closer to the likes of Griezmann and Suarez.

Depending on what happens with these cards, he may even receive an 89 rated card for the new season for his efforts!

Real Madrid has relied heavily on some of their younger prospects this season, with the likes of Federico Valverde, Ferland Mendy, Eder Militao, Rodrygo and Vinicius Junior all playing their parts throughout the season.

As a result, Real Madrid should be set for a number of boosts to players outside of their starting 11 this season, as well as some big boosts to returning loanees such as Martin Odegaard and Sergio Reguilon.