One-shot eliminations are in store for you!

One of the weapons that have emerged as a shining star is the Protocol V.

Perhaps the most viable option out of the Snipers, this gun can be tricky to master.

The Protocol V is one fo the few Sniper Rifles in Hyper Scape!

As such you'll want to patrol rooftops looking for unsuspecting victims to pick off at range. If you're flashy you can use it in a more aggressive manner to take down players health rapidly and follow up with a good secondary.

This is where the Protocol V shines, as the more times you Fuse it with another Protocol V; the more damage it is going to have!

Check out all the different damage levels according to got HyperScapeFandom. 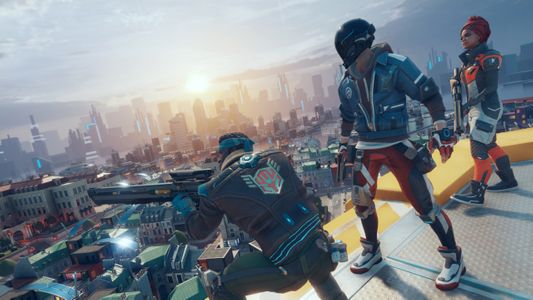 Unfortunately, the Mag Size of the Protocol V does not change the more you Fuse it!

The base Mag Size will remain at three all the way though to LVL 4.

Yes! This is one of the best weapons in the game without fusing, and it is one of the only ones that gets increased damage when Fused.

Being able to deal incredible damage with your Protocol V when it is fully upgraded will be beneficial to you and your team!

So, whenever you get the chance to Fuse it with another Protocol V, we highly recommend going out of the way to do so.

Since this is a Sniper Rifle, your sidearm is going to be vital for your loadout. Do not take one of the heavier weapons in the game such as the Skybreaker; as if you miss with the latter you are doomed!

We recommend taking the following as your second weapon if you are going to snipe during the match:

These are some of the best options to take, as they all deal solid damage and have enough ammo to last a while!