This is one colourful battle!

The first major boss within the game is the Colored Pencils.

While it may seem straight-forward, it can be tough if you're not familiar with how it works.

Here's how to beat the first boss.

How To Beat The Colored Pencils Boss In Paper Mario: The Origami King

Be sure to avoid the target areas as you will take damage. The envelope icon will provide you with some hints (although not necessary).

You need to land on an attack icon as Mario's final spot in order to attack, otherwise, you will not be able to.

When rotating the rings, the arrows will need to be placed in a line in order to get Mario to move around the next ring. Otherwise, Mario will run all the way to the end of the line and come to a halt if he is not given a direction to move. 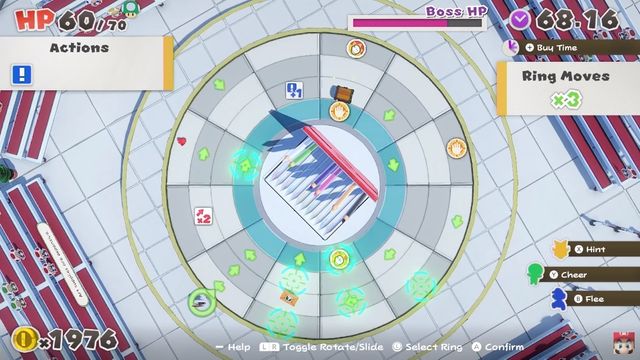 From the beginning, you'll need to rotate the rings so that you finish on the panel behind the pencil case.

You should start in the very middle ring and then focus on the very outer one, it must have a direction straight in-front of Mario or it will not let you move. More often than not, it will be aligned for you and you can use your spare moves to bring in attacks damage boosts, extra action commands, health, chests and coins.

Once you get behind it, select your hammer and whack it.

This will close the lid and force him to damage itself and leave him unable to attack next turn.

On your route, you can also pick up attack boosts to help finish off your opponent faster. 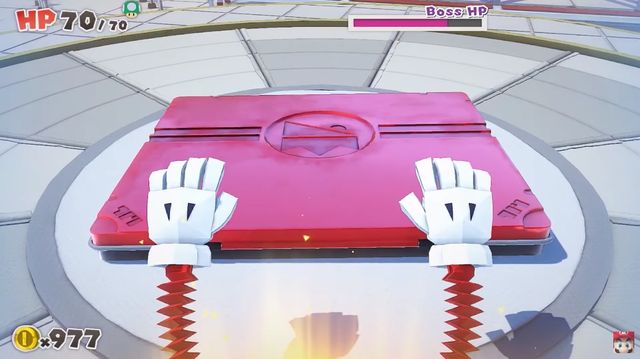 On your second attack, you will need to get in front of the Pencil Case and land on an attack icon; here you'll need to use the jump attack to land multiple hits on the open case.

As the boss's HP depletes, it will become much more difficult and more missiles will land on the battlefield.

Use the Toad cheer to help give you up to 30HP if you're struggling. They will also create a guideline, showing you where your current path will take on (it does not tell you where to go, but rather where you are heading). You can use this more than once in the battle, but it can be costly, so save it to the later stages.

Once it gets down to the last 1/4 of health, it will attack you with its "Rainbow Roll" attack. You can not close the lid this time, nor can you attack face on.

You need to grab the pencils with the 1000-fold arms, so lines the segments up so you arrive on a magic circle face-on.

You'll be able to grab the pencils and slam them straight into the case repeatedly to defeat it.