Start warming up Mjolnir or grab your shield.

Marvel's Avengers, Square Enix's live-service action title, is due out on September 4 - and we now know when the game's Beta period will begin.

Depending on your platform of choice (and whether you pre-ordered the game), you could be playing as early as August 7!

Square's superhero team-up will be playable for PlayStation 4 Pre-Order customers from August 7, while Xbox One and PC early purchasers can jump in a week later on the 14th.

All PlayStation players, even those that haven't pre-ordered, can jump in from August 14, too, while the game's open beta on Xbox One and PC starts on August 21. 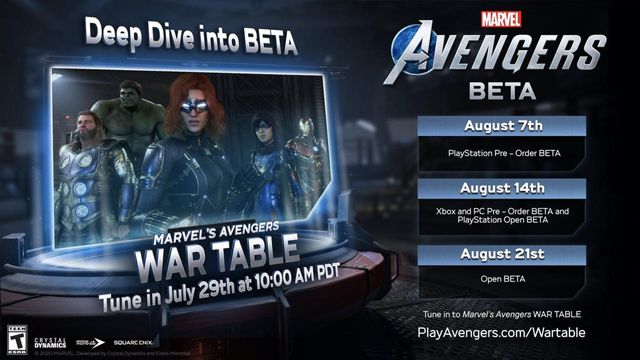 We don't yet know what the beta will include, but we'd expect some multiplayer action from multiple Avengers' perspectives. A stream on July 29 is likely to reveal more, as per the image above.

For more on Marvel's Avengers, be sure to check out our interview with Scot Amos, studio head of developer Crystal Dynamics.